Surveying the health of Malaysia’s workplaces 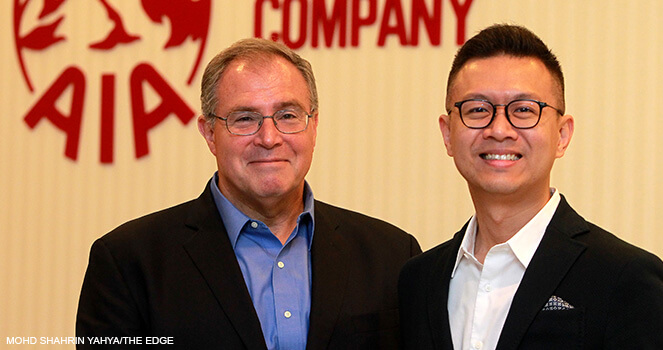 MOST businesses would not dispute that the health of any organisation depends on the well-being of its employees. It is just common sense, which is why all companies provide some level of healthcare for staff.

That said, many find it challenging to determine just how much to invest in staff well-being. After all, creating a healthy workplace can be costly.

But Vitality Group senior vice-president Derek Yach argues that there are many tangible benefits, although many organisations are unaware of the potential value a healthy workplace can create and how to engineer it.

Hence, AIA Bhd is partnering RAND Europe and local academic partner Universiti Kebangsaan Malaysia to create awareness among Malaysian corporates with the launch of the Malaysia’s Healthiest Workplace survey — the first of its kind in the country.

The methodology is borrowed from Britain’s Healthiest Workplace (BHW), the first and only other place where such a survey has been undertaken, and it has a large scope — from workplace facilities and culture to physical and mental health.

While it certainly will not change the country’s corporate health overnight, AIA hopes that it will incentivise and pave the way for improvement. After all, it makes good business sense.

“If you had invested money in 1999, you would have got a bigger return on your investment if you had chosen companies with the best health programmes,” Yach tells The Edge.

Studies show that healthier companies in the US were able to outperform the benchmark S&P 500 Index by 6% to 17%.

Yach points to a 2013 US study by Dr Raymond Fabius et al. A hypothetical portfolio of companies that promoted workforce well-being and safety, on average, created substantially more value for shareholders than the S&P 500 Index (see Chart 1A)

Of course, this merely implies correlation, not causality.

Other studies, however, seem to back up the findings. Companies that won other evidence-based workplace wellness awards outperformed the S&P 500 by 7% to 16% per year. This includes the American College of Occupational and Environmental Medicine’s Corporate Health Achievement Award, the C Everett Koop Award, and the HERO self-assessment.

Interestingly, the original Fabius study was recently replicated in South Africa with consistent results. A portfolio of healthy companies outperformed the Johannesburg Stock Exchange FTSE All Share Index as a benchmark for market performance (see Chart 1B).

Yach is curious to see if the same conclusions can be drawn from Malaysian public-listed companies that take part in the survey. After all, AIA and Vitality Group plan to conduct the survey annually going forward.

“It [will be] interesting to see, in a few years’ time, whether the companies, which the [AIA Vitality] team is going to identify as [having] the best workplace programmes, are the ones that are not just the [best] place to work, but the place to invest because they are likely to show the same outlook,” he says.

“The question is, are they having a material impact, and what constitutes a well-designed programme? I suspect they would. And the reason is not just because they are doing it right for health. It tends to go together with good financial management.”

It can be argued that other factors could have influenced the share price performance of “healthy companies”. For example, they could have been better run to begin with. However, Yach believes there are clear and calculable benefits of investing in wellness.

“If you do it right, it will start showing a decline in healthcare costs, which are quite substantial,” he says.

His prime example is how Johnson & Johnson generated returns of US$2.71 for every dollar spent on employee health and well-being programmes from cost savings and improved productivity.

McKesson Corp saved US$4.7 million worth of medical costs over 2012 and 2013. The company was a recipient of the US evidence-based Koop Award, which recognises companies’ workplace health and well-being programmes.

On the other side of the coin, underinvestment in employee well-being can be costly.

“The studies have indicated a correlation between health and financial performance,” Chang says.

The BHW initiative is in its third year, led by VitalityHealth in partnership with Mercer and The Sunday Telegraph as well as some academic partners.

In developing countries coming off a low base, the effects can be even more pronounced. Take,  the anti-malaria initiative that BHP Billiton funded in Mozambique, which reduced adult malaria infection rates from 80% to less than 10%. Not only did it improve the well-being of the local community but it also reduced absenteeism for the mining giant so substantially that the programme was considered profitable.

The benefits from a well-planned healthy workplace program are clearly shown by Unilever’s Lamplighter programme which has reached around 168,000 employees out of 173,000 worldwide with a positive return on investment (ROI).

Absenteeism is a habit pattern of absence from duty or obligation while presenteeism is the problem of workers working while sick, which could lead to productivity loss, poor health, exhaustion and workplace epidemics.

Lamplighter programme is Unilever’s employee wellbeing initiative that has run for over 10 years and is align with Unilever’s Sustainable Living Plan (USLP).

With millennials looking beyond a good pay cheque and conventional perks when deciding which job to take, more companies are transforming their workspaces into a more inviting environment so people enjoy their jobs more. There is also a conscious effort to provide healthier options at work to gain the edge over the competition.

Yach and Chang say that awards like Malaysia’s Healthiest Workplace will be a nice feather in a company’s cap to attract young talent.

“It will be a factor that will make a company a more desirable place to work for. Millennials, in particular, judge where they want to work based on the quality of the health programmes a company offers,” Yach adds.

For some of the top companies, Yach shares that the recognition would be important, both for the material impact on the bottom line when the implementation is done effectively as well as for prestige.

“Don’t underestimate the value, it also has a public discourse. I was looking online at which companies are the most admired in Malaysia, and you certainly have companies like AirAsia Bhd, Nestlé Malaysia and many others. The question now is going to be how they can stand out when we add in the health component. I anticipate that they are probably going to be out there as well,” he says.

One problem in Malaysia is the lack of data on workplace health. Fortunately, it is one this survey will soon remedy. With more data available to employers, AIA hopes it will inform them on how to better implement effective health-related programmes.

According to Yach, the traditional mindset that treats heathcare as a cost, as opposed to an investment that can boost earnings and reduce costs in the long term, is one of the biggest challenges.

Studies in the US also suggest that the time lag between the implementation of health programmes and when the financial benefits are reaped is unattractive to C-suites that are focused on short-term goals like beating quarterly earnings expectations.

Additionally, healthcare can be viewed within a relatively narrow scope. Often areas like mental health are neglected due to the stigma.

This is a major concern for Malaysian workplaces. AIA’s Healthy Living Index, conducted since 2013, shows that 74% to 76% of Malaysians are concerned about mental health issues — namely depression and anxiety.

The key to tackling these challenges is awareness, says Chang. “The first step is being aware of where you stand. Then you can start implementing what will deliver real change to your employees in the coming years.

“Our goal is really to provide this [Malaysia’s Healthiest Workplace] as a platform to provide employers with intelligence and the data they can take action on.”

That said, AIA is expecting only about 50 companies to participate in the survey this year, a relatively small number but a good start that will set the stage for future surveys.

“In the first year, it is likely that several sectors will have an advantage,” says Yach, noting that labour-intensive industries like plantations will be disadvantaged versus office-based ones like banks.

However, he points out, “as you start moving into the second or third year, the awards would have started focusing on those companies that have made the best incremental improvement.

“Remember, the award is for the healthiest workplace — not the healthiest corporate workplace. Let’s not let the public sector off the list ...  we need to understand how well they can do as well.”

Registration for AIA’s Malaysia’s Healthiest Workplace survey is free and will close on May 15.

A comprehensive survey of the health and well-being of employees in Malaysia will provide public-listed companies with useful information on how to create a healthier and more productive environment for their staff.

The survey, titled “Malaysia’s Healthiest Workplace 2017”, was launched by AIA Vitality on March 16. It covers a broad range of organisations and their workforce.

The survey will give organisations an overall view of their health, how they fare against other employers and practical suggestions to improve health and productivity at the workplace.

With Bursa Malaysia advocating corporate transparency in the marketplace, workplace, community and environment, the findings of the survey can be used to address social and workplace issues.

“This is a great opportunity for companies to participate in the survey that will help them be aware of the health of their employees and the programmes that they currently have.

“It will also show how improving their employees’ health can have a real impact on the productivity of the companies and on the country as a whole.

“This survey is free, so make sure you don’t miss out the opportunity to participate,” he adds.

Vitality Group  chief health officer and senior vice-president of Derek Yach says the survey is the first step for Malaysia to move forward in this area (health of employees). He adds that currently there is a lack of data and awareness of the subject.

“With the data available, organisations can deliver real change to their employees over the years. It can help identify how a well-designed health programme for the workplace can work in Malaysia,” he says.

Based on his experience, intervention is necessary as different cultures and sectors need different workplace health programmes.

Some are more challenging than others.

“One of them is the trucking and transport sector. It’s very difficult to promote a healthy workplace when your workplace is your truck. When you’re on the road, you have to stop at places where there is often no healthy food,” Yach says.

With the survey, AIA Vitality aims to initiate actions and discussions on workplace health as well as help organisations improve their health promotion plans. 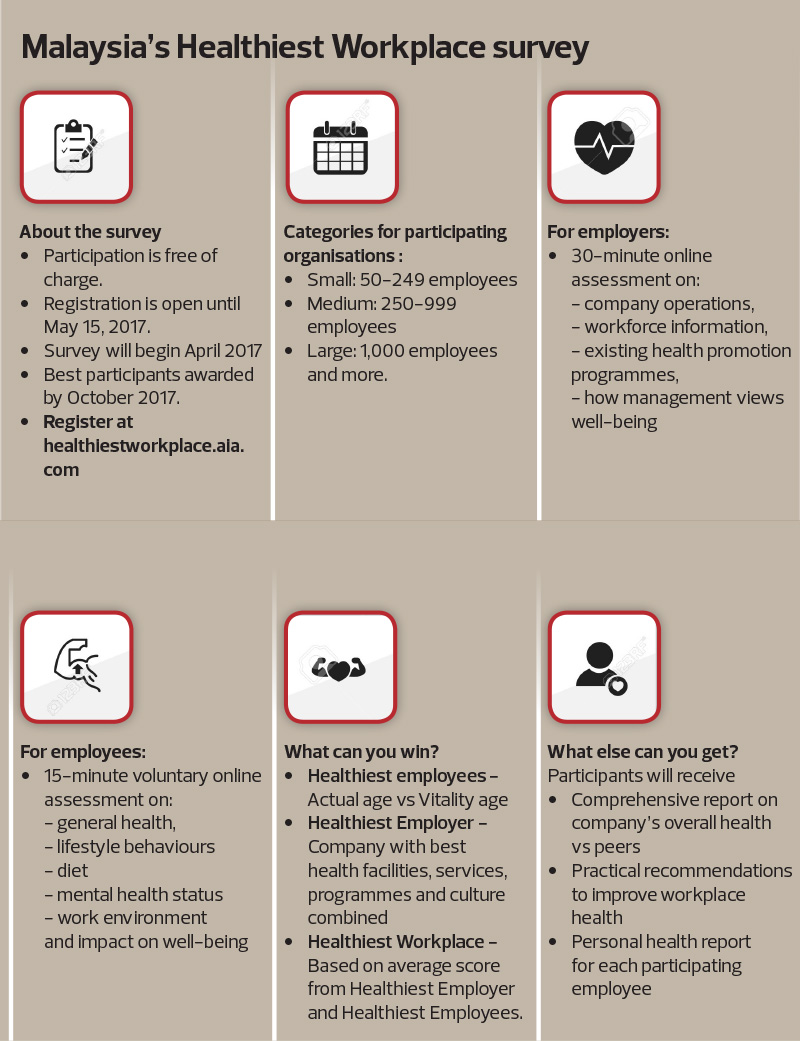