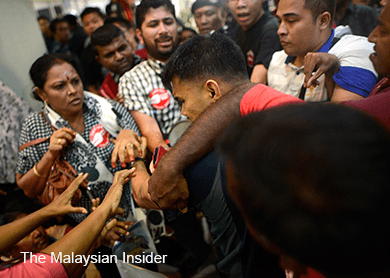 (April 22): Fifty-four people who were initially let off after participating in a protest against the goods and services tax (GST) at the Customs office last month are expected to be charged tomorrow.

Parti Sosialis Malaysia (PSM) secretary-general S. Arutchelvan said a majority of those who were detained on March 23 and subsequently released on police bail were notified yesterday by police to appear at the Petaling Jaya sessions court tomorrow to be charged.

He said this was in addition to 25 other activists, who were charged two days after the protest and whose cases would be heard on May 14.

He described the latest act by police and the attorney-general as ill-intentioned and meant to scare the public from participating in the May 1 rally against the GST.

"More than 40 police reports were lodged against the Petaling Jaya police chief for making unlawful arrests, misusing power, using violence in conducting arrests and also denying those who were detained, their right to meet their lawyers.

"The police and attorney-general have selectively decided not to investigate our complaints and instead decided to charge the remaining people involved in the protest at the Customs office in Kelana Jaya. This is an act of revenge," Arutchelvan said in a statement today.

He said the GST had burdened the general population, especially due to unscrupulous parties who took advantage of the consumption tax to raise prices exorbitantly.

Arutchelvan added that the party's believed that the latest action to charge 54 more people tomorrow was to punish and oppress activist groups who were against GST.

More than 100 people staged a sit-in at the Customs office to get answer to 106 questions they had submitted to the department ahead of the implementation of the GST.

The sit-in was led by PSM and participated by members of a coalition of civil society organisations against the tax called Gabungan Bantah GST.

Police broke up the sit-in after 5pm and arrested some 79 people amid a scuffle between protesters and the police, with police herding people into trucks.

Among those arrested were Arutchelvan, activist Khalid Ismath and retired teacher Annie Ooi, also known as "Aunty Bersih" due to her active participation in previous street rallies by the electoral reform group, Bersih 2.0. – The Malaysian Insider