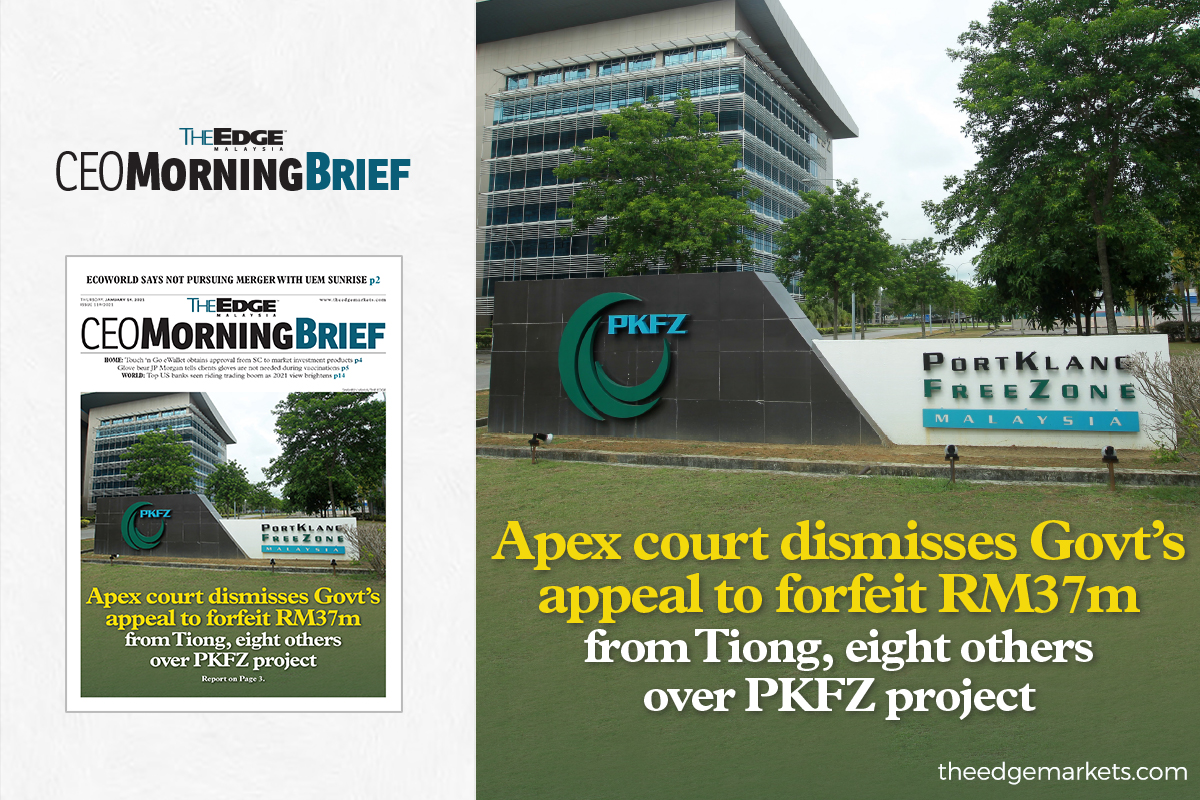 The three-member bench led by Justice Datuk Vernon Ong Lam Kiat, upheld the decision by the Court of Appeal and the High Court in dismissing the appeal. The two other bench members were Justice Datuk Zabariah Mohd Yusof and Justice Datuk Seri Hasnah Mohammed Hashim.

The apex court, however, did not rule on the Government's request for the court to impose pecuniary orders as stipulated under Section 59 of the AMLATFPUAA to impose a penalty on suspected offenders if forfeiture fails. The prosecution was hoping that a ruling would be made on this, which would set a precedent that it could use in other ongoing forfeiture cases, including those related to 1Malaysia Development Bhd (1MDB).

Justice Hasnah, who wrote the unanimous decision, said the prosecution had failed on a balance of probabilities to prove their case to forfeit the said properties over alleged unlawful revenue.

This followed the affidavit from the investigating officer and the deputy public prosecutor (DPP) not stipulating the source or witnesses in alleging where the illegal proceeds came from except to show the money trail.

“The affidavits by the prosecution show a serious gap in the commission of the offence, whereas the respondent had provided and explained in detail.

“We found the prosecution had failed to prove the case on a balance of probabilities. The court ruled the appeal had no merits and we affirm the decision by the Court of Appeal,” Justice Hasnah said in the proceedings which were conducted online via the Zoom app.

Forfeiture based on prosecution of Phang and three others

The prosecution withdrew its case against Phang in 2016 on three counts of criminal breach of trust (CBT) and acquitted her, while the Sessions Court in March 2017 acquitted and discharged Law, Tan and Abok.

Justice Hasnah said the prosecution had submitted that its case was based on forfeiture filed under Section 4(2) of the Anti Money-Laundering, Anti-Terrorism Financing and Proceeds of Unlawful Activities Act 2001 (AMLATFPUA), where there need not be a prosecution on the respondents or, if there is prosecution, it is not needed to secure a conviction.

Justice Hasnah said the prosecution's contention was that Phang had abused her position in committing CBT by releasing funds to KDSB without the approval of PKA's board.

No evidence Phang acted beyond authority

The parties in the matter, Justice Hasnah said, had affirmed that they acted on the advice of their solicitor.

“There is no evidence to support that she (Phang) acted beyond her authority. We (the Federal Court) had examined the affidavit by the prosecution and the police, where we noticed that it failed to describe whose statements were taken.

“The prosecution and police failed to provide the names and identities [of the witnesses] that led to reasons for their belief that the four accused committed an offence that led to money laundering,” she added.

One of the arguments of the prosecution, she said, was that KDSB was to perform electrical infrastructural work on an area within the PKFZ project and that the work was not conducted. But there was no evidentiary proof that Tenaga Nasional Bhd (TNB) did not approve the matter.

“This did not satisfy the balance of probabilities (burden of proof in civil proceedings) on the factual matrix. The prosecution had failed to link [that] the proceeds are a result of the predicate offence, and hence it can be considered as hearsay evidence.

“There is no documentary evidence shown or procured to represent illegal activity,” the apex court ruled when dismissing the prosecution's appeal.

The Government was seeking to forfeit movable and immovable property that includes cash of RM37.8 million, plus a piece of land in Pulau Lumut, Klang, owned by Coastal Skyline, a piece of land in Kota Kinabalu, Sabah, owned by Wijaya Baru Sdn Bhd, and two plots of land in Section 13, Shah Alam, belonging to PKNS that was sold to KDSB.

The decision on the case involves KDSB — the turnkey developer of the controversial PKFZ, whose cost ballooned from an initial RM1.96 billion to a whopping RM7.45 billion.

Besides the prosecution of Phang and three others, two former Transport Ministers, namely Tun Dr Ling Liong Sik and Datuk Seri Chan Kong Choy, were also charged with deceiving the Cabinet with regard to the PKFZ project but both had been acquitted.