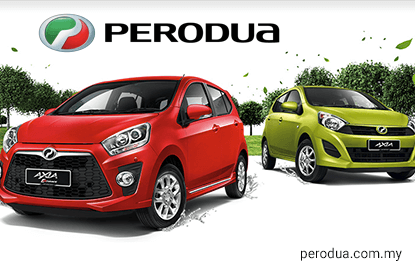 KUALA LUMPUR (July 10): Perusahaan Otomobil Kedua Sdn Bhd (Perodua), the country's second national car maker, saw new-car sales increase 14.8% to 108,500 units in the first half of this year (1H15) from a year ago, driven by its Axia model.

"Based on our internal analysis, we estimate that our market share for the first six months of the year to be 33.8% based on forecasted total industry volume (TIV) of 321,400 vehicles," he told a press briefing on the group's first-half performance review today.

"The sales reduction in the second quarter was mainly due to consumers' reaction towards the goods and services tax (GST) introduced on April 1 and we foresee that demand for vehicles will stay soft in 2H15," said Aminar.

On the other hand, parts revenue for 1H15 fell 2.7% to RM120.3 million, attributed to internal supply issues.

"We are still on track to meet our sales target of 208,000 units for the year, and for after sales as well. Although there was a slight hiccup for our parts segment, we believe it will be back on track by 4Q15.

"Hopefully with some additional effort, our parts business may exceed their targets," Aminar said.

On Perodua's RM600 million new engine plant in Sendayan, Negeri Sembilan, Aminar said the plant is 80% complete as at end-June and is on track for its targeted completion in 4Q15.

The plant will have a production capacity of 140,000 units per year.

Asked whether Perodua will be exploring new export markets, Aminar said the group is still focused on the domestic market, but added that it is open to opportunities to export to foreign markets.

"If there are opportunities for exports, we would like to tap into those opportunities. The last few years have been a learning process for us. For us to enter the export market, our quality has to be of international or regional standards, and we are moving towards that," he said.

"Cost is also an issue and after sales services. We are very particular on these areas. If we are not ready, our image will fall. We do not want to go through that path.

Meanwhile, he said the group is in the midst of finalising its plans to export its Axia model, which will commence this year.

He said Perodua is considering exporting to Mauritius, Fiji and Sri Lanka, where the group had previously exported its Viva models to.

On Malaysian Automotive Association's (MAA) targeted TIV of 680,000 units for full year 2015, Aminar said it would be challenging to meet the target based on current trends.

"It is possible. But with the current trend, it is very, very challenging. For us in Perodua, we will try our very best to meet our target of 208,000 units," he said.