The biotech company that could 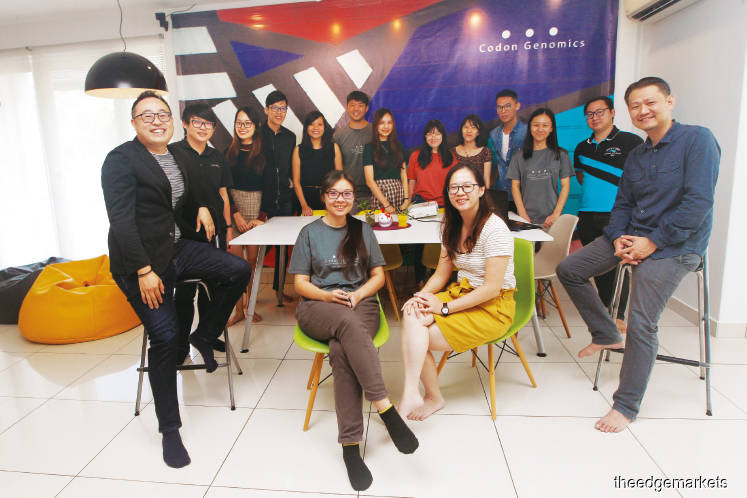 Addressable market: RM500 million for oil palm seed and planting material production in Malaysia and Indonesia alone and US$10 billion for the global bioinformatics market.

Intellectual property status: No patents yet

Product description and USP: Codon Genomics is a bioinformatics company that specialises in analytics and Fourth Industrial Revolution technologies (artificial intelligence, the Internet of Things, data analytics) in the agriculture and pathogen sectors.

Currently exporting: Yes, to the US, the UK, Saudi Arabia and Sweden

Industry challenges: Fighting it out on their own without any external help financially or otherwise.

When Ivan Hoh and Yap Soon Joo (together with another partner who has since exited the business) started Codon Genomics Sdn Bhd in the mid-2000s, it was mainly because they could not find a job in the sector of their choice. Having bought into the hype about the rise of biotechnology in Malaysia, upon closer examination, they found that it was just a lot of hot air.

“The country was not ready for this new technology. At that point, there was no ecosystem for biotech,” says Hoh.

The three partners pooled their money, came up with a princely sum of RM30,000, rented the cheapest office they could find (above a bar in Puchong), bought a server and got going. First, they analysed people’s DNA. But they soon realised that there was no real market for that. At least not yet. So, they moved into pathogens and plants, or rather, agriculture.

“We have worked on interesting things, from an organism that is smaller than a virus that devastated the Australian coconut industry in the 1970s to discovering extensive drug-resistant tuberculosis in Malaysia to working with collaborators to detect Brucella in non-pasteurised milk,” says Hoh.

The company, which has been around for nine years, has built up quite a repertoire. It has worked on 150 research projects with various institutes and universities, conducted more than 30 scientific seminars and published 35 papers in established journals. And it has expanded beyond Malaysia to the US, the UK, Saudi Arabia and Sweden.

The company has also hired scientists in related fields — molecular biologists, bio-informaticians and software engineers — and started building its own applications and fungal databases such as Ark Gene and Circle Plus.

Hoh says one of the biggest pathogens in oil palm is Ganoderma boninense. “Our database tracks all the new emergence of this so that we can tackle it. Not only that, we can use the DNA information to detect what strain it is. The Malaysian Palm Oil Board is using this to monitor diseases.”

“People need to know that the oil palm is grown sustainably and we think this can be achieved through science and the intelligent use of data,” says Hoh.

But since Malaysia and Indonesia are the only producers today and have committed not to increase plantation acreage, they will have to do more with less. On top of that, the plants are dealing with the effects of climate change — for instance, less rain and changes in the soil chemistry — not to mention attacks by animals, insects and other pests.

This is where the company comes in. “Using data, we can come up with a new breed that requires less water, In the future, we will be able to tailor-make the trees to suit different locations, soil conditions and weather. We could improve yields by 10% by using better genetic materials,” says Codon Genomics senior application scientist Dr Lee Wei Kang.

“This industry is worth more than RM60 million. The extra money can be reinvested into marketing, creating better forests and developing sustainable management for life.”

The company can also help in seed production. “The world produces up to 200 million seeds a year because there is a lot of demand for planting and the replanting programme is up 10% to 20% of the crops every year. We need high quality oil palm seeds to sustain the industry. We can contribute our knowledge, data and technology to create some really useful applications,” he says.

That is why Codon Genomics came up with Agrinome, a cloud-based platform that takes IT into the field of agricultural research to help achieve a more sustainable oil palm industry, says Lee. “Our mission is to provide a solution to enable oil palm plantations to achieve higher efficiency and scalability as well as provide them with a level of automation in their practices.

“Our software helps plantations produce high-quality seeds that can ultimately be planted in the field. It also helps plantations monitor their field performance, that is, what you need to do so that your planting material grows well.”

Hoh points out that there is currently not much automation in the palm oil industry. “We want to revolutionise this and put automation and digitisation in every step. So, we have to start from the basics and work with plantations to optimise their workflow and digitise what they can using technology such as the Internet of Things (IoT), artificial intelligence (AI), big data and software.”

With breeding, for example, there is genomic data as well as field performance data. There is also labourers’ workflow data. “Right now, data such as how much the trees grow every year and what the oil content is every season is being collected manually,” he says.

All this is incredibly tedious and labour intensive. The only way to do this efficiently is with the use of software, says Hoh. With Agrinome, the plantation workers tag the plants with IoT devices so that all the parameters can be tracked automatically. Then, they pass a sensor over the tag and the data is uploaded to the cloud.

With this information, the CEO or manager of the plantation can have an insight into what is actually happening on the ground, for example, in terms of seed production, or how many workers are deployed at any given time, says Lee.

This can help smallholders with things like getting the Malaysian Sustainable Palm Oil certification because the digital platform can increase transparency and flexibility as it tracks each step in every workflow. “So, you can track all the plants, know their origins, their parents and the seedling production process. It is totally transparent for future certification,” he says.

The company plans to expand into Thailand, Indonesia and the Philippines and is projecting revenue of RM30 million in about five years. It is looking to hire more bio-informaticians and experts in disciplines such as AI as well as data scientists. It also plans to expand its sales team to assist with regional expansion.

“We wanted to create our own technology and do the country proud. When we started, people thought we were crazy because nobody was willing to do what we were doing. Things were tough and banks would not lend us money. So, we had to get by on our own,” says Hoh.

What kind of institutional support is the company looking for? “The government has good intentions, but it does not know how to help. The people it puts in charge of giving out grants may not understand the technology or know what biotech is all about,” he says.

“So, when you give money to someone who does not know the business, they cannot help you. In the past three years, we have looked for financial help to develop our software. Although things would go well at the initial meeting, they would ask for all sorts of reports. In the end, despite all the enthusiasm, things would peter out.”

Also, the approach is often wrong. For instance, to qualify for BioNexus status, which comes with a whole lot of incentives, the company would have to allow Biotech Corp to have a say in all its decisions. Not many companies are prepared to do that.

Hoh hastens to add that it is not because the government has no vision or money. “The funding mechanisms are there. They are just not being disbursed by the right people and the execution can be improved.”