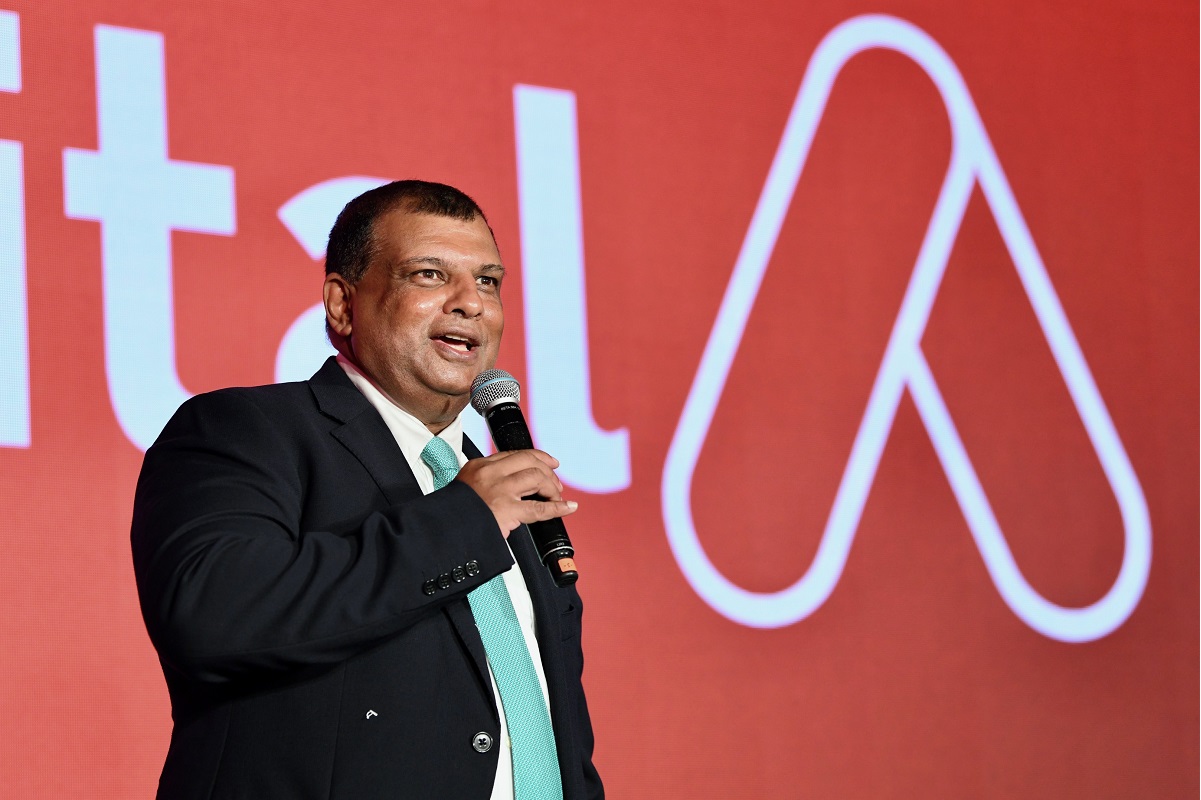 KUALA LUMPUR (Jan 28): AirAsia Group Bhd has been renamed to Capital A Bhd to reflect the group's new business strategy as an investment holding group for not only its aviation business but also its logistics, lifestyle and financial services ventures, according to its chief executive officer (CEO) Tan Sri Tony Fernandes.

At Capital A's event to unveil the new corporate identity on Friday (Jan 28), Fernandes said the name change is not just about unveiling a new logo but a significant milestone that marks a new era for the investing holding group, which reinforces that the group is not just an airline anymore.

This comes after the group received almost 93% approval from its shareholders at its extraordinary general meeting on Thursday (Jan 27) to change its name from AirAsia to Capital A.

Fernandes said that the group aims to achieve 50% of its revenue from its non-airline business by 2026 and it plans to focus exclusively on the ASEAN region with a 700 million population and strong growth prospects in the future.

Capital A's CEO added that by 2026, it aims to achieve the following in the ASEAN region: its airlines connecting over one billion passengers; its engineering division, Asia Digital Engineering, to be the market leader in maintenance, repair and overhaul; airasia super app to be the app of choice, 10 million monthly active users for BigPay; 10% market share in Southeast Asia for Teleport, in the logistics and e-commerce industry; five million sign-ups for edutech arm AirAsia Academy; and over 21 million monthly orders on airasia grocer.

Fernandes said that the group is unfazed by the entries of two new airlines, namely SKS Airways and MYAirlines, which were approved in December 2021.

"We do not see the new airlines as an issue unlike some who try to block or talk about overcapacity, because our goal has always been to become the best in everything that we do, so no, competition does not affect us in any way," Fernandes remarked.

Fielding questions from the media on its Practice Note 17 (PN17) status and how it would affect its liquidity, Fernandes said that the classification is merely an "accounting issue" and does not affect its liquidity by pointing to the RM2.5 billion it managed to raise in 2021.

"I mean, if you look at the PN17 classification, it is purely accounting and in fact, the solution has nothing to do with liquidity.

"That is why I have spoken with Bursa to relook at the rules and clarify the definition of what constitutes PN17, because it is not really clear to the layman.

"PN17 has zero effects on us. We have technically been PN17 for the last two years but for the relief measures.

"We raised RM2.5 billion [in 2021] and we are raising another RM1 billion of capital soon. PN17 was imposed because we did not pay the leasing costs which appear on the profit and loss (P&L) statement.

"By accounting the restructuring, a merger deficit of RM5 billion has been recorded on the P&L. If we take these two things out, we would not be PN17 as the solution to PN17 is accounting as well, because the group has more than enough liquidity.

"We are very focused on growing and adding value. We will continue to do so," Fernandes highlighted.

When asked by theedgemarkets.com on how the group plans to unlock values from its digital businesses as it currently suffers from the "conglomerate discount", which rates investment holding companies with diversified businesses at a lower valuation, Fernandes responded by saying Capital A is still undergoing an evolution from an airline to an investment holding company with diversified businesses in logistics, lifestyle and financial services.

He added that any talks of exit in the form of an initial public offering of its digital business is premature and the group will announce it in due time.

"Changes are not going to happen overnight. We will just wait and see. The market will have to decide whether there is value in what we are doing," Fernandes added.

Meanwhile, Fernandes said that the high oil prices will not affect its airline business as the group has pricing power owing to pent-up demand for travel after two years of movement restrictions due to the pandemic.

"Last time I checked, every airline is affected by oil prices, but we do have pricing power in that we have the capacity and we can charge higher but the demand is still there.

"Oil right now is a little bit frothy and it will come back. Crack prices are still manageable, so it is not a big issue for us right now. But oil prices still affect everybody, so that is one good thing for us," Fernandes added.

At the time of writing, shares in Capital A Bhd (formerly known as AirAsia Group Bhd) were unchanged at 58 sen, valuing the investment holding company at RM2.41 billion.