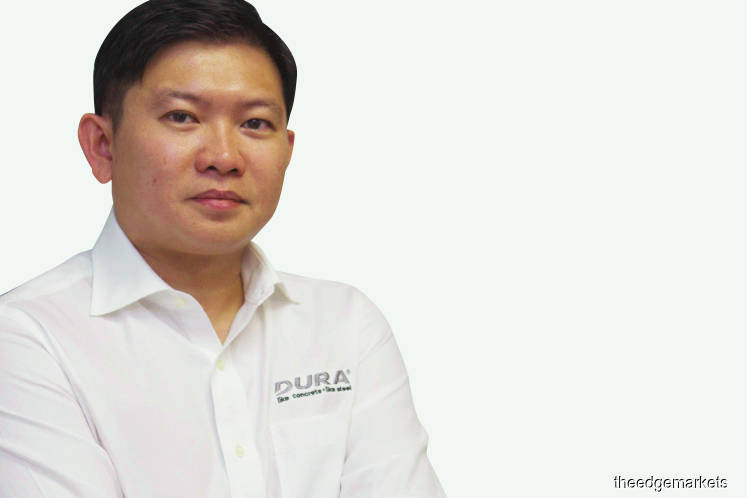 Addressable market: Hard to gauge. It is a billion to trillion-dollar market in many countries.

Intellectual property status: Registered in Malaysia in 2010 and waiting for approval in India.

Ultra-high-performance concrete (UHPC) is an advanced cementitious material with greater mechanical strength and durability than conventional concrete. A bridge constructed using UHPC is expected to last a few thousand years whereas a standard concrete structure can only do so for several hundred years.

The technology, which has gained traction over the last two decades, is used all over the world in the construction of buildings, bridges and other types of infrastructure.

When you talk about UHPC, most people think of LafargeHolcim, a French-Swiss company that is the largest cement producer in the world. It has the most advanced technology in terms of UHPC and its brand — Ductal — is considered the Rolls-Royce of this type of concrete.

However, little-known Malaysian company Dura Technology Sdn Bhd has been manufacturing its own version of this advanced concrete using its own technology for the past 15 years at a fraction of the cost and it has already made waves internationally.

The Ipoh-based company started by selling its UHPC locally before gradually venturing overseas. Last year, it signed an agreement with Shinde Developers Pte Ltd, allowing the India-based construction firm to use its technology and expertise. The company earns revenue when Shinde manufactures, sells and exports the UHPC under Dura’s brand name in the subcontinent (which includes Afghanistan, Bangladesh, Bhutan, Nepal and Pakistan) and islands such as Sri Lanka and the Maldives.

In 2017, Dura went into China and took a 20% stake in a joint-venture firm called ZhongLu-Dura International Engineering Co Ltd, where it would contribute its technological know-how.

Most recently, the company signed a memorandum of agreement with Siam Cement Group plc, the oldest and largest cement concern in Thailand. If successful, its UHPC will be used in Thailand, Cambodia and Laos.

“Siam Cement wants to see if our product is viable. So far, the feedback has been positive,” says Dura founder and CEO Jackie Voo.

Dura, which is majority-owned by timber-related company Leweko Resources Bhd, made a profit of about RM300,000 in FY2018 due to higher capital expenditure for its business expansion. However, it expects to enjoy a net profit of RM4.44 million in FY2019 from an annual revenue of RM37 million. “The numbers could be better when the profits from overseas projects start to pour in,” says Voo.

Coming up with his own formula

When Voo completed his master’s degree in civil engineering at the University of New South Wales, Australia, he started researching UHPC for his doctoral dissertation in 2001. In doing so, he managed to come up with his own formula for it.

When he returned to Ipoh in 2005, he spent six months using local ingredients to refine his UHPC recipe so that he could bring the cost down significantly. Leweko, a public-listed company that was run by the father of one of his university mates, took an interest in his work and bought a 51% stake in the business for RM15 million.

It helped to have the right people believe in him because his company was in the red for six years while he did his research and pilot projects. “We had no business at all when we started. I believe that my boss is a true gambler because he was from the timber industry and had no knowledge about UHPC or anything like that,” says Voo.

He knew the company stood a fair chance because even though his UHPC was lower in quality than that provided by Lafarge, it was much cheaper. For local buyers, it was three times cheaper than importing the concrete from Australia.

The company manufactured the precast concrete at its plant in Ipoh and sent the pieces to be assembled by contract. “Sometimes, the assembling work was done by us as well,” says Voo.

Dura built another two bridges for JKR in 2011, five in 2012 and eight in 2013. As at October, it had completed the construction of 120 UHPC bridges in Malaysia with another 30 in various stages of completion. “Dura currently dominates the country’s UHPC market,” says Voo.

In March last year, Leweko announced that the company had secured an RM11.68 million contract from Ekovest Construction Sdn Bhd to do concrete works on the third phase of the Duta-Ulu Kelang Expressway (DUKE) project. Dura will supply, deliver and assemble precast UHPC for the Setiawangsa-Pantai Expressway, also known as DUKE 3.

“We used to build bridges on the outskirts. But now, we are building DUKE. It means that our products are accepted in prime areas within Kuala Lumpur, which has a high population density,” says Voo.

Today, Dura has one of the largest UHPC mixers in the world and the quality of its products is comparable with that of global brands, he adds.

Dura is more than just a business to Voo. It is something close to his heart and he feels compelled to keep making it better. This goes back to how the company was founded.

Voo’s friend, the son of Leweko’s chairman, was diagnosed with leukaemia and died soon after they met again in Malaysia. Before he died, he told his father that Voo’s venture had potential and that he should invest. That was why the old man forked out RM15 million for the stake in Dura.

“We were classmates and roommates in Australia. He was one of my best friends,” says Voo.

“I was working on the subject of UHPC for my master’s dissertation and he would come to my lab and hang out with me. Then, I went on to do my PhD for three years and he came back to Malaysia to work for his father.

“But we stayed in touch. He asked me to look him up when I completed my doctorate to see how we could work together.”

That was how it started. But then, the hammer fell. “My friend went for a check-up and they found that he had leukaemia. He did not drink or smoke and was very fit and yet he had it. Before he died, he told his father to continue investing in me,” says Voo.

It was heart-wrenching. That is why he feels compelled to do his best to grow the company. He cannot let his friend down. “Dura is me. I am Dura,” he says.

More than a decade later, Voo is still a hands-on manager. “I would probably need three to five years to groom a few people to help me run the business more smoothly,” he says.

He sees a bright future for the company, mainly because more governments and companies are embracing UHPC as a substitute for concrete. His main risk is if a government is not well managed and does not have enough funding to pay for the project.

Nevertheless, Voo believes that his main job is to keep innovating and stay at the forefront of the industry. “We want to be on the front line — and we always are,” he says.