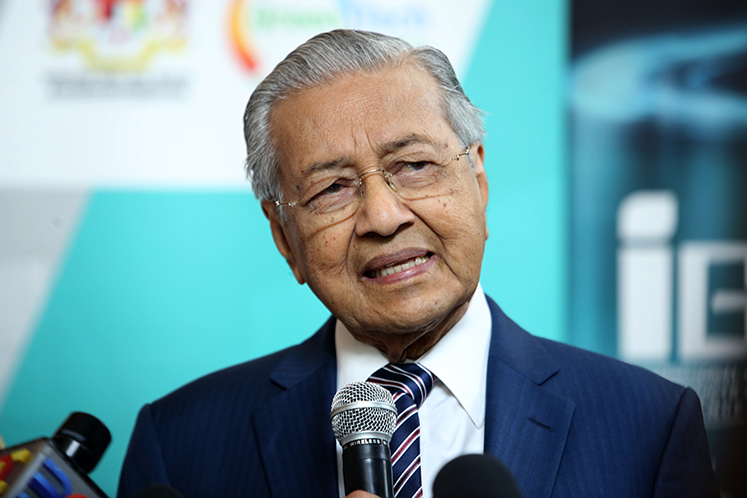 “I sought an ad interim order that the status quo of the parties from today onwards to be preserved so that there is no damage done until the matter can be heard on July 9.” — Tun Dr Mahathir Mohamad’s lawyer Haniff Khatri Abdulla

(This story has been corrected to explain the ad interim order application by Tun Dr Mahathir Mohamad. The error is regretted.)

KUALA LUMPUR (June 18): The High Court yesterday had refused to allow Tun Dr Mahathir Mohamad's application for an ad interim order to bar Bersatu president and prime minister Tan Sri Muhyiddin Yassin and the defendants of the civil suit from taking any action that will prejudice their case before the injunction application is heard on July 9.

Justice Datin Rohani Ismail yesterday granted postponement of the hearing of the mandatory injunction, since the defendants sought adjournment as they need more time to file affidavits.

As such, the ad interim orders were sought to ensure the defendants do not perform any further “wrongful act” that may prejudice the current issues until the main action is heard and decided, according to Dr Mahathir's lawyer Haniff Khatri Abdulla.

An ad interim order is an order issued by a court during the pendency of the litigation to ensure the status quo. However, this application was declined by the judge.

Haniff said the decision to seek the ad interim orders was made since the hearing of the mandatory injunction application could not proceed today “due to the need of the defendants to put in their documents”. “I sought an ad interim order that the status quo of the parties from today onwards to be preserved so that there is no damage done until the matter can be heard on July 9,” Haniff told reporters when met outside the court.

The group is also seeking an injunction against Muhyiddin and the other defendants from holding any Bersatu meeting or amend the party constitution.

Furthermore, they are seeking an injunction against the Registrar of Societies (RoS), preventing it from verifying or rectifying all Bersatu documents, and a declaration that Section 18C of the Societies Act 1966 (which allows the expulsion of members who bring their disputes to the court) is not applicable.

However, Muhyiddin's lawyer Rosli Dahlan made an application to strike out the action on the grounds that it is "frivolous, vexatious, scandalous and an abuse of court process" as Dr Mahathir and the other five plaintiffs have no locus standi. The court fixed for the striking out application to be heard on July 9 as well.

"There were irregularities of law and irregularities of facts. So when you have that, we used Order 18 of the Rules of Court to say that this kind of suit ought to be struck out for being frivolous, vexatious, scandalous, and an abuse of court. So that is what Order 18 is all about. And that is what we are filing," Rosli told reporters when met outside the court.

The RoS, who is also named a defendant in the suit represented by Senior Federal Counsel Ahmad Hanir Hambali, denied allegations that the RoS was involved in any conspiracy, claiming that the RoS is a public officer that only carries out its duties prescribed by the Societies Act.

The RoS is also seeking to strike out the action by Dr Mahathir.