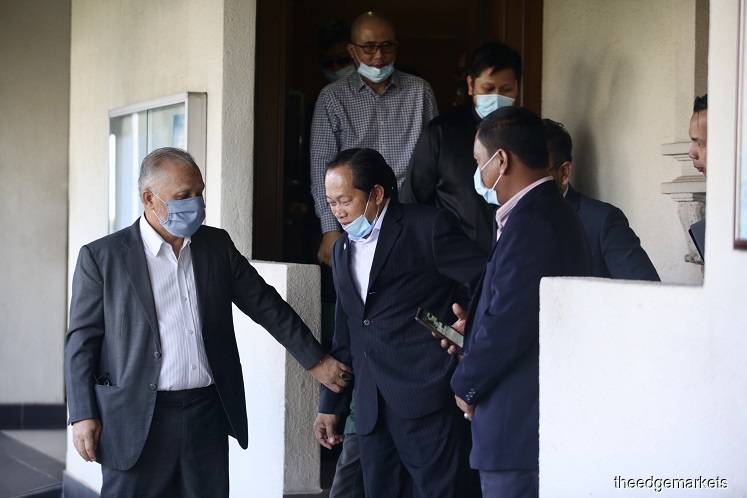 Ahmad (centre) allegedly said the money was not from Najib. (Photo by Sam Fong/The Edge)

Ahmad, 54, who is also the Pontian Member of Parliament, initially filed the application on Feb 14 in the Sessions Court where he was charged. He applied for the charges to be dropped on the grounds that they are baseless and contravene the laws.

Today, defence counsel Hamidi Mohd Noh filed in the submissions for the strike-out application before Sessions Court Judge Azman Ahmad, where the judge fixed July 9 for the hearing of the application.

Ahmad was slapped with the two charges on Jan 21.

The former deputy minister is charged with money laundering by not declaring to the Inland Revenue Board (IRB) the RM2 million he received from former prime minister Datuk Seri Najib Razak in the income tax return form for assessment year 2013 and in doing so violated Section 113(1)(a) of the Income Tax Act 1967.

He was alleged to have received the money from Najib, believed to be proceeds of unlawful activities, through an AmIslamic Bank Bhd cheque dated Nov 27, 2013, which he personally cashed on the same day.

If convicted under Section 4(1) of the Anti-Money Laundering, Anti-Terrorism Financing and Proceeds of Unlawful Activities Act (AMLATFPUA), Ahmad could face a maximum fine of RM5 million, up to five years in jail or both.

Ahmad allegedly said the money was not from Najib, and that he had not seen a cheque for that amount and neither knew about the cheque nor cashed it.

For this offence under Section 32(8) of the AMLATFPUA, the federal lawmaker faces a maximum fine of RM3 million, jail for a maximum of five years or both if convicted.

He pleaded not guilty to both charges.