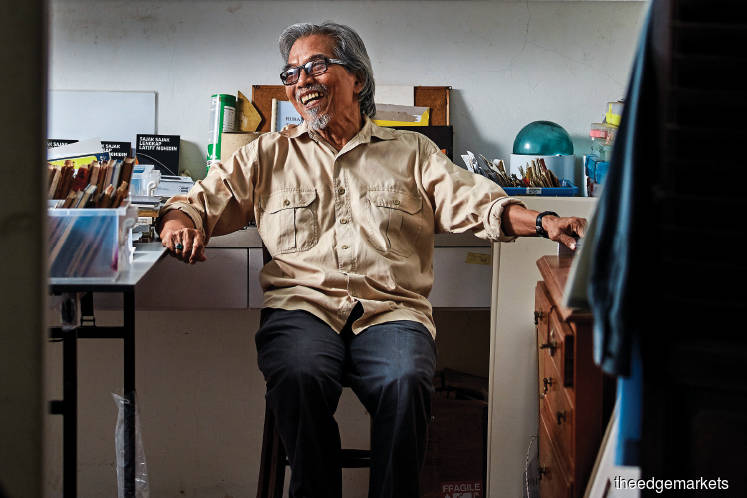 After 66 Years Carving Out A Reputation As One Of Asia’s Great Modernist Artists, Malaysia’s Latiff Mohidin Will Make History As The First Southeast Asian Artist To Be Honoured With A Solo Exhibition At The Centre Pompidou In Paris. Options Flies To Penang To Be The First To Speak With Him Since The News Became Official.

Diana Khoo Has The Story.

Latiff Mohidin has been known by many names. When young, he was hailed as the “boy wonder” and “the magical boy with the gift in his hands”, for his unmissable prodigious talent. In fact, he was just 11 when he sold his first work, a painting of a brinjal, to Sir Malcolm MacDonald, the then-British High Commissioner to Singapore. Later, Latiff became known as “Malaysia’s Picasso” for his sheer virtuosic ability to transcend mediums (this leading modernist painter is also an accomplished sculptor and poet) and, essentially, stay at the peak of his creative game for what has been decades already.

Now, at the age of 77, the boy-wonder-turned-legend has pulled yet another ace from his sleeve as he will be the first Southeast Asian artist to be featured at the Centre Pompidou’s In-Focus Gallery at the upcoming Latiff Mohidin: Pago Pago (1960-1969) exhibition, to be held from Feb 28 to May 28. The significance of this exhibition cannot be overrated as it will also be the National Gallery Singapore’s first travelling exhibition on Southeast Asian Art — the happy result of success in the gallery’s efforts and commitment to promote regional art on the global platform. Those who have visited the City of Light would also know of the Pompidou’s iconic design and how it houses one of the world’s two most important collections of modern and contemporary art which, if counted, number over 120,000 works.

For the full story, pick up a copy of The Edge Malaysia (Feb 5) at your nearest newsstands or visit optionstheedge.com.