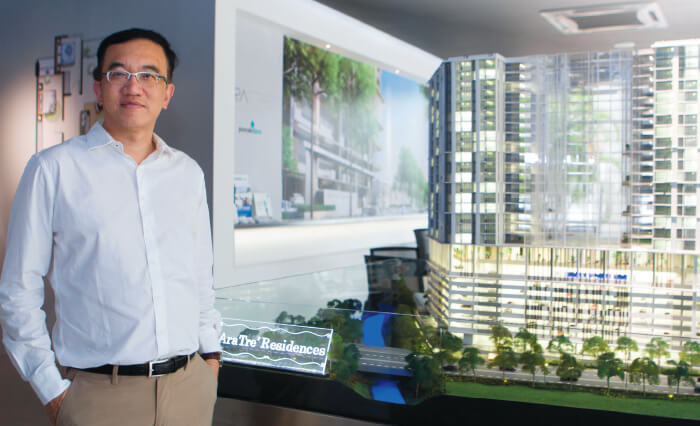 AraTre’ Residences’ pricing is significantly lower than other projects in the area. Picture by Patrick Goh 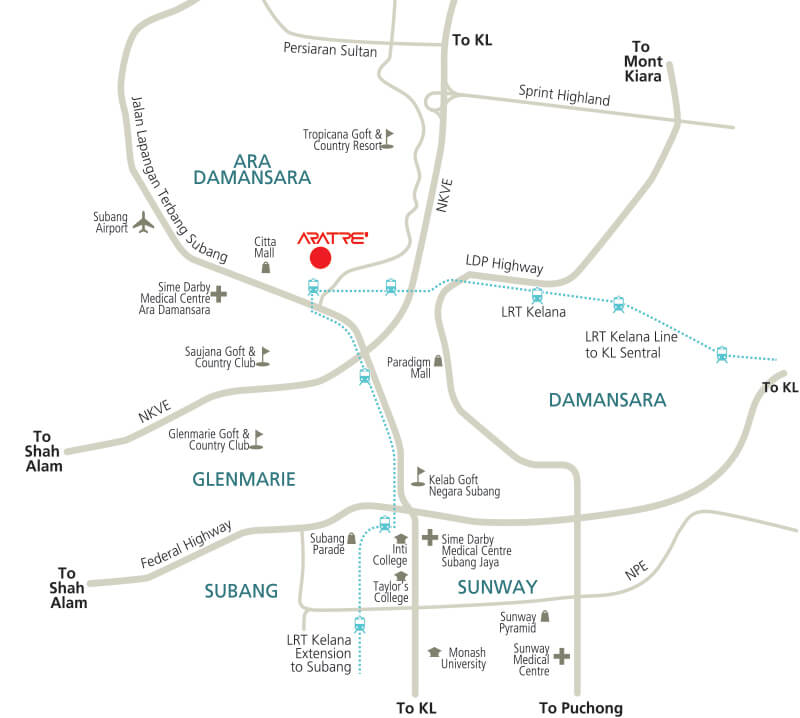 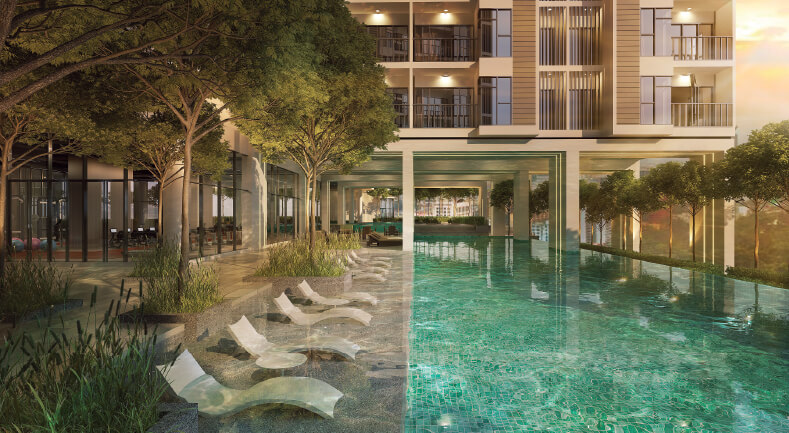 From its lively commercial centres to its vast green parks, Ara Damansara is a good example of a well-planned, affluent township. Built on large parcels of freehold land in Petaling Jaya North along the Sultan Abdul Aziz Shah Airport road and encompassing gated-and-guarded terraced housing and condominiums, the township is one of the most sought-after areas in the Klang Valley.

Land is becoming increasingly sparse there, but there are still some zones left to be developed. Among these is a 2.67-acre tract next to Evolve Concept Mall and Ara Damansara LRT Station, where boutique developer Puncakdana Sdn Bhd plans to build AraTre’ Residences.

At a glance, many of the units on a diagram of the upcoming development, displayed on a white board next to a scale model in the sales gallery, have been marked off.

“We have been getting a lot of queries and good response for this project so far,” says Puncakdana executive director Chuah Chong Ewe.

In his first face-to-face interview since assuming the post in 2016, Chuah tells City & Country that 50% of the units had been taken up before the official launch on May 26. “This project is attractive because it is modern and affordable. It is set to be the tallest development in Ara Damansara (about 115m above sea level),” he reveals.

Sitting on a 2.67-acre leasehold tract, AraTre’ Residences has a gross development value (GDV) of RM520 million. Due to be completed in the second quarter of 2021, it will offer 727 apartments in three 27-storey towers. “The land was initially acquired under a joint venture (JV) between Puncakdana and Yayasan Selangor about 20 years ago, but we have now fully settled the payment in cash,” reveals Chuah.

Chuah says the modest size of the units is intentional. “We would like to create something that is practical and of usable size. In fact, the smaller units are the ones that have been fully booked. We will also provide two parking bays per unit.”

Indicative selling prices start at RM501,400, or RM645 psf. “One of the draws of AraTre’ Residences is its pricing. It is significantly lower than other projects in the area,” says Chuah. “Most of the plans were approved prior to the implementation of the new building guidelines, so we are able to save cost and offer lower pricing to our buyers.”

Established in 1996, Puncakdana first emerged as a developer of condominiums in Ara Damansara. Its projects include Puncak Seri Kelana Condo, Puncak Nusa Kelana Condo, Dana 1 Commercial Centre and D13 Office Tower. It was also behind the development of Citta Mall in the township in 2010. The three-level mall has a net lettable area of 424,000 sq ft and a gross development cost (GDC) of RM110 million.

“Most of our developments are in Ara Damansara as we feel it is a flourishing area, and we can create an impact [there]. Our focus is on developments on pocket land and ready amenities around the Klang Valley,” says Chuah, who hails from Penang and practised as a lawyer for 20 years before switching careers.

Apart from his role in Puncakdana, he is also the CEO of Pentamaster Corp Bhd, an automation and technology company. Chuah has his own personal portfolio of projects in Penang, including Elit in Bayan City, Oasis Residence in Relau, and Golden Triangle and Golden Triangle 2 in Sungai Ara.

“It is quite different handling projects in KL, where everyone appears more serious and methodical. In Penang, we just sit in kopitiams, wear slippers and talk numbers. It is more simple,” he quips.

According Chuah, AraTre’ Residences is poised to become a contemporary, yet affordable, development in bustling Ara Damansara. Puncakdana plans to capitalise on its reasonable pricing and strategic location.

“We are offering something that is affordable yet luxurious. We offer the same features and facilities like other developers in Ara Damansara, at a lower price. Our units will be semi-furnished too [with airconditioners, heaters, kitchen hood, hob and cabinets],” he points out.

“We are targeting buyers who are young professionals, young couples and young families. We estimate AraTre’ Residences will attract a good mix of owner-occupiers and investors, but we are mainly targeting end users.”

The design is modern and unpretentious, with quite a number of green spaces. The building will be certified by Green Building Index (GBI).

Says Chuah, “The overall aesthetic will be simple and modern. The design is tailored to suit our tropical climate. Some of the facilities will be sheltered, such as the infinity swimming pool and garden decks.”

Chuah also highlights the location. “AraTre’ Residences is right next to Evolve Concept Mall and Ara Damansara LRT Station. The mall is already established, and it will be convenient for the residents.”

Ara Damansara is a mature area with a wealth of amenities such as malls, commercial centres, schools and a medical centre.

Nearby amenities include The Oasis Square, Paradigm Mall, Tesco, Ara Damansara Medical Centre, IOP International Preschool Kinderland and the Japanese School of Kuala Lumpur. Saujana Golf and Country Club and Tropicana Golf and Country Resort are a short drive away.

LaurelCap Sdn Bhd director Stanley Toh agrees that “Ara Damansara is an established neighbourhood with good access to other areas such as Subang Jaya and Kelana Jaya”.

“Depending on pricing and location, generally, the demand for serviced apartments is positive,” says Toh. However, “the best-selling property type in Ara Damansara is terraced houses”.

He says the average price of serviced apartments in Ara Damansara is between RM600 and RM700 psf, and the current average rental is about RM2.30 to RM2.80 psf, with a yield of about 4% to 5%.

He believes AraTre’ Residences’ pricing is fair. “It is located in an established neighbourhood with good access to neighbouring areas. The project is quite high density, with 727 units within 2.67 acres. The built-up areas of between 775 and 1,227 sq ft are not very large, thus, the absolute price is affordable,” he opines.

Some of the key drivers in Ara Damansara are its accessibility to Jalan Lapangan Terbang leading to the NKVE, and via Tropicana to the LDP, as well as the Ara Damansara LRT Station near Evolve Concept Mall, says Toh. “There may also be a spillover effect from Kwasa Land developments towards the north of Ara Damansara.” The upcoming 2,330-acre Kwasa Damansara township by Kwasa Land lies within Subang and Sungai Buloh.

“In terms of its future outlook, there are many projects with similar development types within a 5km to 7km radius, such as Urbana Damansara by Weida (M) Bhd and Cantara Residence by Sime Darby Property,” he notes.

“Prices will hold but it will take some time before you can see a significant upward trend momentum in the area.”

Meanwhile, Chuah is confident the value of AraTre’ Residences will appreciate. “The prices of our project are competitive, and taking into account that rental shouldn’t be a problem in this area, we strongly believe value will go up in the coming years.”

Chuah reveals that Puncakdana recently acquired a 62-acre tract in Cybersouth under a JV. “We are always on the lookout for new land and projects. Our future projects and land bank total about RM1.6 billion in GDV.”

“What differentiates Puncakdana from our peers is the fact that we move fast, we buy things with a faster turnaround, and we are keen on JVs. We are efficient and we choose to handle things at an optimum level. We are also developing projects that are mostly medium-range, so we know our markets and how to target them. So long as the pricing and location are right, development projects should do well.”

He acknowledges the challenges the industry is facing. “The market is not too great but that forces us to work harder. We have to strategise our marketing. It is a different ball game to access the right buyers for the right products. Loan approval is a challenge for us developers, but fortunately for AraTre’ Residences, the approval rate is 80%, which is quite encouraging.

“We hope AraTre’ Residences will be a success, and be instrumental for us to develop more projects [in the Klang Valley] in the near future,” he sums up.