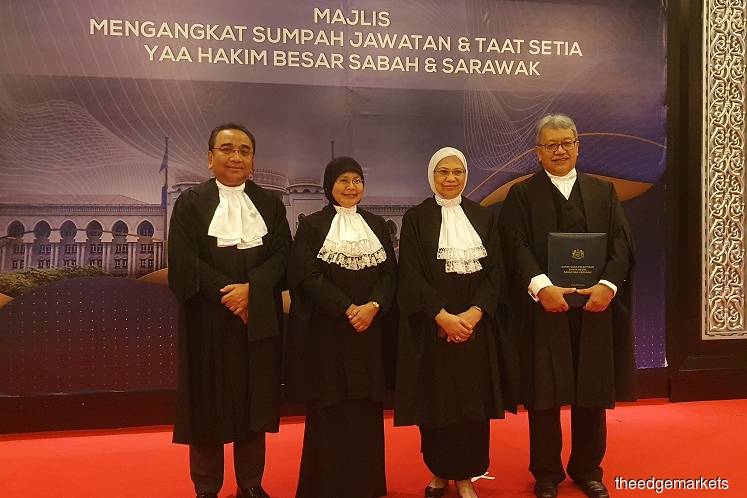 PUTRAJAYA (Feb 25): Chief Justice (CJ) Tan Sri Tengku Maimun Tuan Mat reminded judges today that they need not show allegiance or bow to any individual or a particular group but only uphold the principles in law and especially the Federal Constitution.

“Judges should be steadfast to uphold the principles of the law, freedom from any interference, influence, pressure, threats or any form of disturbances from anyone or in a group.

“They need not show allegiance to an individual or a particular group, but only to uphold the principles of the law. The times we are living in are indeed challenging.

“The provisions of our Federal Constitution are being stretched and tested to the limits and it is in times like these that the judiciary must remain impartial and ever ready to deliver justice according to the Rule of Law,” she emphasised.

Justice Tengku Maimun also said the judiciary has to always be independent and do not need to answer to anyone, but only to the highest law of the country, namely the Federal Constitution.

“The judiciary will continue to appoint judges based on their quality, character, judicial temperament and other merits. I urge judges to always discharge their duty with honesty and justice, when the judiciary is being criticised,” she added.

The CJ said this in her speech after witnessing the appointment of the new Chief Judge of Sabah and Sarawak (CJSS) Justice Datuk Abang Iskandar Abang Hashim, replacing Tan Sri David Wong Dak Wah, who had retired on Feb 19.

Justice Abang Iskandar's appointment as the 10th CJSS was effective on Feb 20 and he took his instrument of appointment from the Yang di-Pertuan Agong Sultan Abdullah at the Istana Negara today.

The new CJSS, who is from Sibu, is 60 years old and is married with three children.

Justice Tengku Maimun said public confidence in the judiciary is important and this is where the media plays an important role.

She said lately the judiciary is facing a lot of criticisms, especially in dealing with high profile cases.

“The criticisms centred on the judge's integrity, giving the picture that the court is one-sided to certain litigants. The fact is the court is never in favour to any litigants. The plaintiffs or defendants or the public prosecutor or the accused are given equal treatment by the court,” the CJ said.

For this reason, she hopes that journalists report the proceedings in court based on facts and not on their observation or some subjective view by certain parties.

Justice Tengku Maimun said the public confidence would be severely dented when the integrity of the judges and the judiciary is questioned without any basis.

“Any unfair and incorrect reporting of the court's proceedings would certainly negatively affect the judiciary and the justice system in the country. Hence, the media should ensure what they report is accurate and objective.

“It is upsetting that some media take the easy way out by giving sensational and inaccurate comments without taking consideration of the whole facts just to increase their readership,” she said, pointing to a recent article by a columnist suggesting that courts and judges should undergo continuous evaluation.

“In my view this is an irresponsible comment that questions the integrity of the judges and is a clarion call to destroy judicial independence, when it is a body to protect the Federal Constitution and the rights of its citizens,” she said.