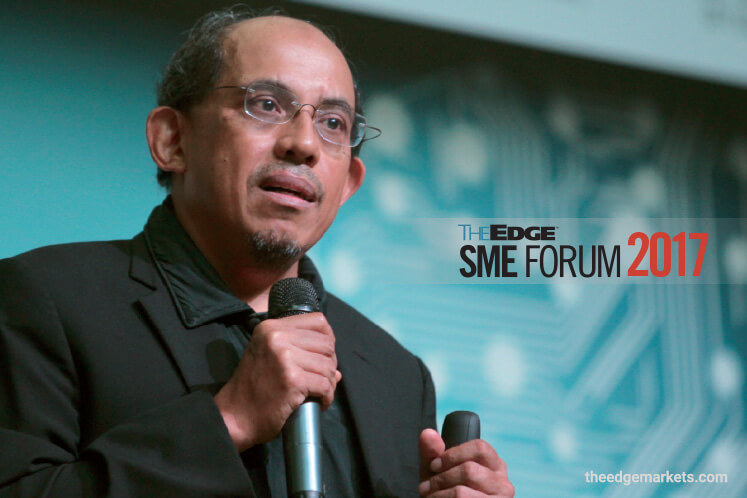 Technology levels the playing field. If small and medium enterprises (SMEs) are smart about how they embrace Industry 4.0, it will give them enough of a competitive advantage to compete with larger companies on their own turf, says Microsoft Malaysia’s national technology officer Dr Dzaharudin Mansor.

Dzaharudin, who spoke at The Edge SME Forum 2017 in Kuala Lumpur recently, points out that businesses that will thrive in the years to come are those that embrace newly democratised technologies such as machine learning (ML) and cloud computing — the driving forces behind Industry 4.0.

Democratisation of a particular technology refers to the process by which it becomes accessible to more people. While these technologies have been around for decades, they only became accessible to the masses in the past few years, says Dzaharudin.

“It is not that these technologies did not exist back then — I studied ML some 30 years ago — but they were expensive and not widely used. Not many took the initiative to figure out what they could do with it,” he says.

“Today, this is no longer the case. There are many ML platforms that allow people to come up with their own solutions more easily. Therefore, businesses that will thrive in Industry 4.0 are those that embrace these technologies and apply them in their operations and services.

“This is not only limited to ML and cloud computing but also data analytics, artificial intelligence and the Internet of Things (IoT). With an innovative mindset, SMEs should be able to compete with even the big players in the years to come.”

Last month, Microsoft released its Asia Digital Transformation Survey, which found that only 34% of the 113 leaders who responded to the survey have their full strategy in place, says Dzaharudin. Almost half of them (47%) are still working on specific strategies while the remaining 19% have limited strategies or no strategy in place.

According to Dzaharudin, there are four major technology megatrends driving the digital disruption — mobile, social, big data (combined with IoT) and hyperscale cloud computing. One example of a company using all four technologies is ride-hailing service Uber.

“To use Uber, both the drivers and riders use their mobile devices. They leverage social networking in the rating system for both drivers and riders and they use big data analytics to process the huge amount of data that they have collected in a short amount of time. Finally, they use the hyperscale cloud to facilitate and provision the whole computing system,” he says.

Uber is now taking it a step further by introducing Face Application Programming Interface, which is part of Microsoft Cognitive Services, to increase user security. To ensure that the driver using the app matches the account on file, drivers are required to periodically take a selfie as a visual verification.

According to Dzaharudin, this has saved Uber months of development work. The company also uses it to tailor the user experience.

Due to the digital disruption and technology megatrends, there are some notable changes in the business environment that leaders should acknowledge to get the upper hand, says Dzaharudin. One such change is the shift of power from companies to consumers.

“Since consumers are more empowered to reach out to businesses with all sorts of queries, why not cut the cost of customer service by using bots and training machines? Bots are more than capable of handling about 30% of customer queries and can generally deliver faster service than humans,” he says.

Despite the fact that competition is now on a global scale, local SMEs should not fear industry giants as they have the advantage of being flexible and agile, says Dzaharudin. “Small companies can come up with new ideas, experiment, fail and try again to create a big impact and succeed in the global market. Think about Waze. It was once a small company, but it became a billion dollar business in a short amount of time.

“It is time we acknowledge the ability of small enterprises to disrupt huge traditional businesses. It is all about knowledge and innovation more than anything else.”