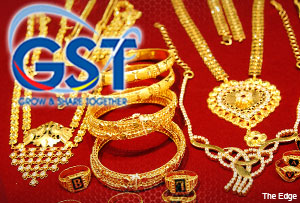 SEBERANG PRAI (Sept 18): Malaysian gold jewellers may have to contend with a 20% to 30% drop in sales, when the country's proposed goods and services tax (GST) takes off on April 01 next year.

“Jewellery buyers would definitely feel the substantial 6% pinch in the purchase price, but we are certain that after two years of familiarisation with GST, sales will increase? It is a short term impact,” Foong said at a press conference here, on the impact of the GST on gold jewellers. Penang is home to 80% of the country's gold jewellers.

Globally, Foong said Malaysian gold jewellery exporters would continue to maintain their competitiveness when the GST is implemented.

Foong said the three schemes introduced by the federal government, would exempt gold jewellers from the GST.

“The approved jeweller is not required to pay the tax charged by the registered supplier.

"The ATS indicates that all goods imported by jewellers are subjected to GST, but an approved jewellery manufacturer is allowed to suspend it for the import of goods,” Foong said.

He urged goldsmiths with an annual turnover of more than RM500,000, to register their businesses with the Royal Malaysian Customs Department.

He said it was a relief that the schemes would help gold jewellery exporters sell their goods at competitive rates. Foong said most of the gold products were exported to the Middle-East.