Harnessing the miracle of mangosteens 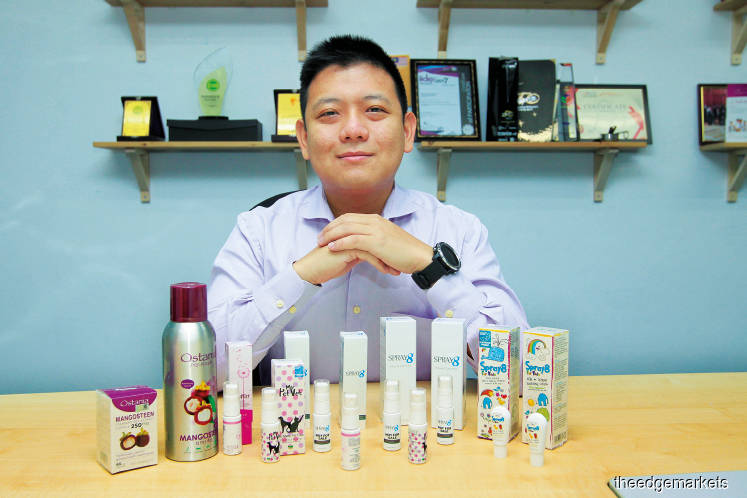 Addressable market: US$87.1 million in Malaysia and US$9.27 billion globally

Product description and USP: Furley Bioextracts uses biotechnology to extract active ingredients in home remedies and turn them into products.

Currently exporting: Yes, to Australia, Europe, Vietnam and the US

Local medicinal inventions usually do not get international recognition. Take Furley Bioextracts Sdn Bhd’s Spray8, which harnesses the many benefits of mangosteens to treat wounds.

The mangosteen has long been regarded as the “queen of fruits” among the practitioners of traditional medicine. The fleshy fruit is known for its anti-inflammatory and antimicrobial properties as well as its antioxidants and immune-boosting attributes.

“Mangosteens are everything a superfood should be and their extracts are highly beneficial in treating wounds,” says Furley managing director Kelvin Soo Quai Siang.

Furley does not just deal in mangosteen-related products. It is an award-winning biotech company that focuses on health and wellness products using a variety of natural substances, such as collagen for its line of cosmeceuticals and daun kaduk (Piper sarmentosum leaves) that helps with the management of arteriosclerosis and osteoporosis.

How does it work? According to Soo, when the water-based solution is sprayed on a wound, the substance works to kill bacteria and stop the growth of more bacteria, helping to reduce the inflammation.

Furley’s markets include Vietnam and Bosnia, where the product is widely used in hospitals to treat skin afflictions and wounds. Its products are also sold in Europe, the US and Asia-Pacific via Amazon.

It was Soo’s father who had the idea to look at the properties of mangosteens. Stuart Soo had worked in the biotechnology industry for more than three decades before setting up a company of his own in 2006. He travelled the world, exploring biological processes for industrial purposes.

When Stuart was working in New Zealand, he learnt of the many ways the kiwifruit was being used. For instance, applying biotechnology to enhance the fruit’s innate bioactive compounds such as vitamin C, vitamin E, flavonoids, carotenoids and minerals.

This inspired Stuart to look at tropical fruits, mangosteens in particular. “In traditional medicine, especially in Malaysia and Indonesia, there was documented evidence of mangosteen skin being used to treat skin problems,” says Soo.

Dried mangosteen powder is a popular home remedy for treating skin problems such as eczema, cuts, rashes and swellings.

Furley’s research confirmed that mangosteens have strong phytonutrients, are anti-inflammatory and kill bacteria, including antibiotic-resistant strains. So, it was convinced of the medical goodness of the exotic fruit, says Soo, who took over the company after Stuart passed away last year.

The mangosteen skin extract — DermaXan — is derived using proprietary technology that allows the maximum extraction of active components with minimum waste, he adds.

Furley has won numerous awards, including SME Corp Malaysia’s Best Innovation Award in the biotechnology and bio-agrotechnology category in 2013. It was also one of four biotechnology finalists at the World Cup Tech Challenge 2016 (in the US) organised by the Silicon Valley Forum.

Soo says the wellness market, valued at US$4.2 trillion in 2017, holds plenty of opportunities for biotechnology as more people actively pursue a holistic lifestyle.

“Wound infection is a major safety concern for patients as well as healthcare professionals globally. So, wound care is essential to reduce infections and promote patients’ well-being. The rising incidence of diseases such as pressure ulcers, diabetic ulcers and venous stasis ulcers is likely to result in a growth in demand for advanced wound care products for treating these conditions,” business consulting firm, Grand View Research Inc, noted in a Nov 6 report.

One of the main contributors to this is the growing prevalence of Type 1 and Type 2 diabetes, which is the leading cause of the increase in demand for advanced wound dressing products at healthcare centres around the world. The report notes that Asia-Pacific is expected to register the fastest growth over the forecast period due to the growing geriatric population, which is prone to various disorders.

“Being a Malaysian company, we want to make a difference by helping people gain access to good solutions and help increase the awareness of good wound care. Then, we will see a reduction in chronic wound problems, especially gory ones like bed sores, gangrenous wounds and ulcers,” says Soo.

“All these afflictions complicate our daily lives and we feel that this product can make a difference. We have a problem with the rising incidence of diabetes in Malaysia and this is the main reason for long-lasting wounds,” he points out, adding that this is taking a toll on those dependent on public healthcare.

“The head of the wound care unit, Dr Harikrishna KR Nair, is very forward thinking and he has been using the sprays to test their efficacy on severe diabetic wounds. The results have been encouraging.”

But it has been far from plain sailing for the company. For starters, it has had to contend with legislation as well as expensive and onerous processes that stand in the way of expanding the market for its products.

Soo says legislation should aid innovation and not vice versa. “There should be basic processes and guidelines in place rather than heavy regulations right from the beginning.”

He adds that the government needs to be “more dynamic” and a thought leader in this space rather than always playing catch-up. “The regulators should be more accepting of traditional products, with a degree of scrutiny, of course.

“I am not saying that everything should be approved. But to impose the same level of legislation that is imposed on pharmaceutical drugs is a different thing altogether. Not many small and medium enterprises can comply with this because it would cost millions of ringgit.”

For example, the requirement of the Ministry of Health’s National Pharmaceutical Regulatory Agency to have a Good Laboratory Practice (GLP) certification right at the get-go impedes a lot of good innovation, says Soo. “I do not doubt that GLP is a great testing methodology, but it is super expensive. A regular laboratory certification for dishwashing liquid costs RM30,000, but a GLP certification for the same product costs RM300,000.”

He hopes that Spray8 will become the response of choice for wound care before patients resort to more expensive treatments. “I hope that one day, every home will have one,” he says.

“In the long term, we want this to be used in more public hospitals around the world. We need to get more distributors who understand this product as it is not a simple one to sell. It is for wound care. So, it is not like we can just leave it on a shelf in a pharmacy and hope that someone will pick it up.

“Not everyone understands how to sell this product. But fortunately for us, our current distributors know what the product is about and how to sell it.”