My brother is innocent until proven guilty, says sister of MH370 pilot 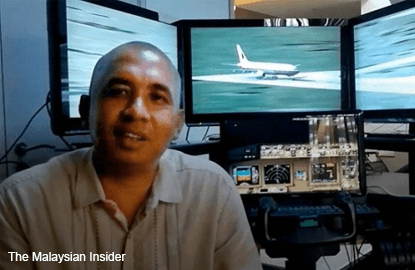 KUALA LUMPUR (March 4): The sister of Malaysia Airlines flight MH370 pilot Captain Zaharie Ahmad Shah has warned against making him the "scapegoat" for the missing plane, saying Zaharie is innocent until proven guilty.

Sakinab Shah, who has been speaking out on behalf of her brother, said the "rogue pilot" theory touted by air crash investigators as the most likely explanation for the mystery was "only a theory".

"Please do not judge him based on theories.... don't blame him unless there is evidence. I want to say that (he's) innocent until proven guilty. That is the mantra of modern civilisation," UK daily The Mirror quoted her as saying.

"If you have nothing tangible and nothing by way of evidence, it's tantamount to predicting he is guilty until proven innocent. This sets us back in the Dark Ages."

Sakinab and other family members had remained silent over speculations regarding Zaharie's involvement in the flight's disappearance until March last year, when they said no one should blame the pilot for any wrongdoing.

"As things stand today, with no tangible evidence to show, NO ONE, be you politician, scientist, aviation expert, plane crash investigator, pilot, retired pilot, media or whoever else... NONE OF YOU have a right to blame Captain Zaharie Ahmad Shah for any wrongdoing," Sakinab had said.

She also said theories that Zaharie had hijacked the plane did not square with her knowledge of him as a "man of integrity" and a pilot with an unblemished flying record of 18,000-plus hours.

However, investigators are still pursuing the possibility that Zaharie had deliberately flown the jetliner to the end.

In February, Australian Transport Safety Bureau (ATSB) chief commissioner Martin Dolan told British daily The Times that if MH370 could not be found in the next few months, it would have to provide an explanation and alternative to governments.

"And the alternative is, frankly, that despite all the evidence, the possibility that someone was at the controls of that aircraft and gliding it… if we eliminate all of the current search area.

"If we haven’t found it, then we’ll have to be contemplating… that there were control inputs into that aircraft at the end of its flight," Dolan was quoted as saying.

There has also been speculation that Zaharie was a supporter of jailed former opposition leader Datuk Seri Anwar Ibrahim, and that the hijacking was an act of political protest.

MH370 disappeared from radar on March 8, 2014, en route from Kuala Lumpur to Beijing. In August 2015, the Australian Joint Agency Coordination Centre (JACC) confirmed that a part of the aircraft known as a flaperon had been found on Reunion Island.

Most recently, a piece of suspected plane debris was found this week on the coast of Mozambique, thousands of km from the search zone, and will be analysed in Australia for any link to MH370, officials said.

All 227 passengers and 12 crew members on board the flight are presumed dead after an official declaration on Jan 29, 2015 classifying the incident as an accident based on international aviation rules.