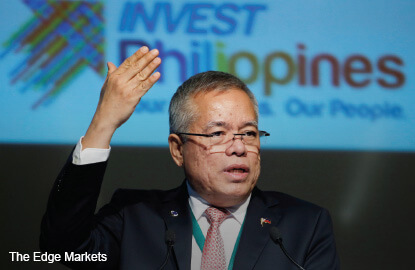 +A
This article first appeared in The Edge Financial Daily, on November 11, 2016.

KUALA LUMPUR: The Philippines, which attracted US$65 million worth of investments from Malaysia last year, is expecting a big jump in the amount for this year and next year through partnerships in the infrastructure and plantation sectors.

Philippine Trade Secretary Ramon Lopez said ongoing discussions on exploratory and feasibility studies via public-private partnerships, including a railway project, could lead to investments of up to several hundred million dollars.

Philippine media reports quoted Lopez as saying that a Filipino-Malaysian joint venture has offered to build a rail line in Metro Manila, on the sidelines of President Rodrigo Duterte’s visit to Malaysia yesterday.

But Lopez said the US$1 billion (RM4.26 billion) proposal from the Philippines’ A Brown Co Inc and Malaysia’s East West Rail Transit Corp was unsolicited and will have to be studied, according to the ABS-CBN News website.

“However, if infrastructure projects such as rail construction come in, it would mean investments worth US$200 million to US$300 million, which is more than double,” he said.

Malaysia was the Philippines’ 10th-biggest trading partner last year as well as its 11th-biggest export market and eighth-biggest import supplier, with total bilateral trade amounting to US$4.36 billion.

Lopez, who is part of Duterte’s delegation, said there are big opportunities for Malaysia to invest in its oil palm and rubber segments.

“Malaysia is strong in oil palm and rubber. As part of our Philippine Palm Oil Industry Roadmap (2014-2023), we have identified about one million hectares for possible oil palm plantation and processing in Mindanao and Palawan. Those are big opportunities [for Malaysian investment],” he said.

As for rubber, Manila is aiming to provide 40,000ha of land in Mindanao over the next five years.

Lopez added that Malaysia’s expertise in halal certification would also benefit the Philippines, which hopes to tap into the US$2 trillion to US$3 trillion global market.

He said that as the chairman of the Philippine Halal Export Development and Promotion Board set up this year, he aims to strengthen the nation’s capabilities in halal certification.

“We intend to gear up the halal ecosystem in Philippines with a value chain boosted with Malaysian investments in hardware such as slaughterhouses, third-party poultry grower and food processing,” he said.

On trade, Lopez said the Philippines is keen to strengthen its trade relationship with fellow Asean members.

“Initially, we wanted to be part of the TPP (Trans-Pacific Partnership agreement) but frankly, between that and the strengthening of Asean and our deal with the Regional Comprehensive Economic Partnership (RCEP), we would rather focus on our region where we belong with neighbouring countries for now.

“The Asean economy is one-third or 30% of the world economy, so with free trade agreements with China and India, and with Asean and RCEP, that would be a big increase in growth.