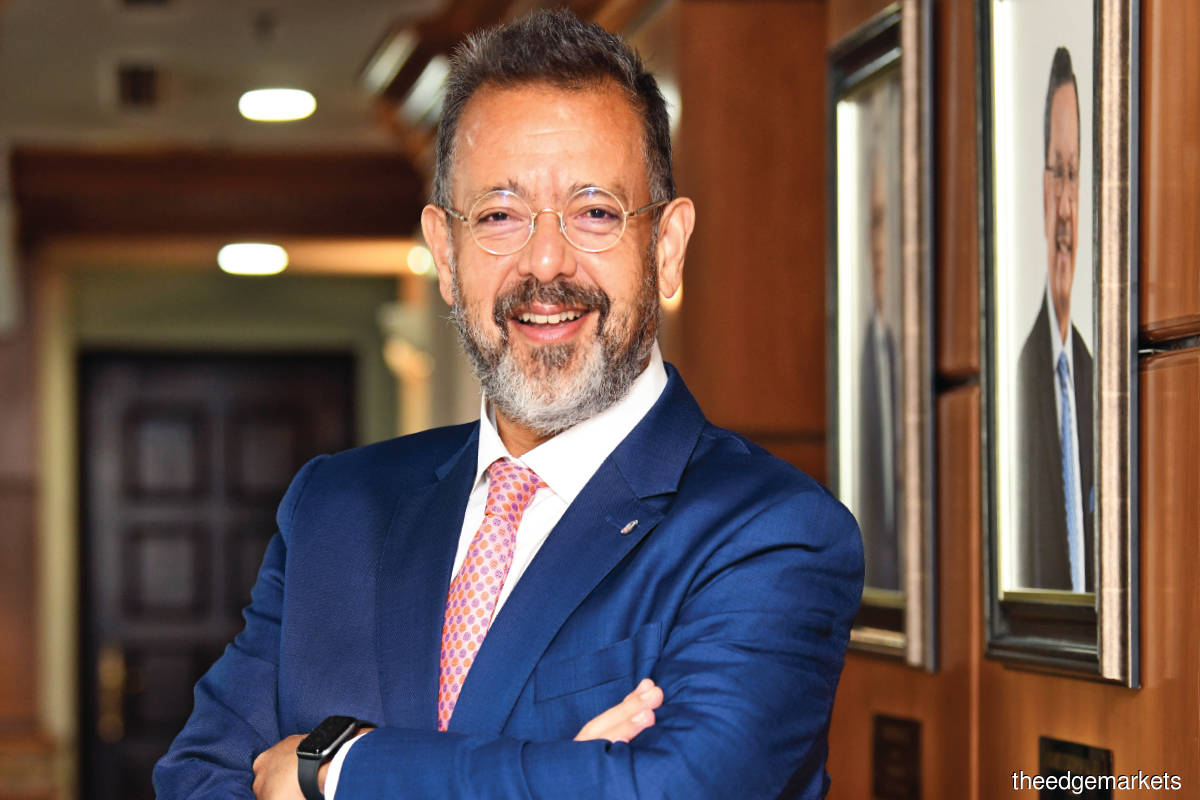 Umar: I think the key thing is that one would assume that PLCs want to be able to raise capital efficiently. They want a good share price with transparency, [which] will mean support, support of your share price means secondary issuance at a better price. Existing shareholders are happy, it all comes together. (Photo by Shahrin Yahya/The Edge)

RECENTLY, Bursa Malaysia Bhd, which operates the stock exchange, undertook an analysis of 39 major public-listed companies (PLCs) in key sectors, which collectively make up 50% of the total market capitalisation on the local bourse.

The study, dubbed Assessment of Corporate Malaysia, compared the 39 companies’ performances for two time periods — from 2004 to 2015 and from 2016 to 2020 — and found that during the first period, the companies performed better than in the last five years, despite the market downturn of 2008 and the crude oil glut of 2014. According to the study, the benchmark FBM KLCI’s earnings per share has been muted since 2007-2009, the index’s earnings have declined by 34% since 2017, and the compound annual growth rate (CAGR) from 2016 to 2020 was -5.4%.

On the back of these findings, Finance Minister Tengku Datuk Seri Zafrul Aziz during his special address at InvestMalaysia 2021 announced a PLC Transformation (PLCT) programme to be spearheaded by Bursa Malaysia and hinged on five tenets — the PLCs are to be performance-driven; grow as sustainable, socially responsible and ethical organisations; have improved corporate governance; be digitally enabled; and support the nation-building drive to advance the economy. In a nutshell, the PLCT is aimed at sprucing things up at Bursa Malaysia, improving companies’ financials and making things more interesting for investors.

In an exclusive interview with The Edge, Bursa Malaysia CEO Datuk Umar Swift says, “If you look at the profitability of PLCs on our market, they have suffered because of Covid-19. So, the call to action is the performance of the market, and it’s all about profitability. It’s about growth; what you want to see is sustained strong growth … We are now in recovery mode, 90% of the population is vaccinated. It (the economy) is opening back up, there will be a return to profitability.”

On the salient features of PLCT and how it works, Umar says, “It’s free, we provide guidance, we provide support. That being said, if people choose not to opt in, that is their choice, but a management that is committed to growth and engaging its investors will most likely opt in.”

To recap, Bursa Malaysia has been given the mandate to develop and implement the five-year PLCT programme, which is slated to commence at the end of the year. Bursa Malaysia will have support from the Ministry of Finance and the Securities Commission on this initiative. Asked which sectors he expects to perform well, Umar points out that property development should be in vogue, as well as electronics and technology. And as things normalise, plantation companies’ earnings are likely to get a shot in the arm, owing to high crude palm oil (CPO) prices, among others. “We will see some of our favourites (on Bursa Malaysia) come back. What we should see is the recovery of our traditional sectors … The real theme at the moment is one of recovery, that is our focal point,” he adds.

The initiatives for PLCT are centred on similar successful plans undertaken in May 2004 to revive ailing government-linked companies (GLCs).

At InvestMalaysia 2020, Bursa Malaysia chairman Tan Sri Wahid Omar had highlighted the need to address the 5.4% decline in the earnings of PLCs between 2015 and 2019. The decline is likely to have worsened as a result of the shutdowns brought about by the pandemic.

Wahid suggested the Government-Linked Companies Transformation (GLCT) programme undertaken in May 2004 be used as a guideline for PLCT.

To recap, from 2004 to 2015, the net profit of 17 GLCs under review grew 10.2% a year from RM9.9 billion to RM26.2 billion, while their combined market capitalisation grew close to 190%, from RM133.8 billion to RM386 billion. The GLCT introduced key performance indicators, board composition initiatives, the revamp of Khazanah Nasional Bhd as well as changes to the management of the GLCs. It also emphasised performance, governance, shareholders’ value and stakeholder management.

Umar adds that while market capitalisation is a key benchmark, he is particularly interested in “the pivot to green” — sustainable, socially responsible and ethical development, governance and digital enablement, and nation building, which is aligned to shared prosperity.

“Those entities listed on the bourse are somewhat, if you like, old economy, and that’s property, plantations, banking and finance. So, where are the new economy companies? And it is about driving an ecosystem. So, we’ve been having conversations with MDEC (Malaysia Digital Economy Corp) and other government agencies on how to work together to make a conducive environment to nurture and grow … The market will be driven by new entrants, growth potential, current profitability … All these things will come through. So, there is far more complexity to it,” he says.

Another key aspect of PLCT is that it ties in with the Perkukuh Pelaburan Rakyat (Perkukuh) initiative launched in August this year.

While details are scarce, Perkukuh is aimed at clarifying the mandate of GLICs, enhancing the focus on developmental and catalytical investments to spur new growth and enhance socio-economic impact, and future-proofing GLICs with best-in-class governance, capabilities and strategies, among other key initiatives.

To put things in perspective, the GLICs have some RM1.7 trillion in assets under management and make up a quarter of the entire market capitalisation of companies on Bursa Malaysia.

“It [PLCT] goes hand in glove with Perkukuh, so you have institutional investors who are looking for transparency.

“You have to have a great product for these funds domestically, and they also need to be risk-averse, they need to manage their risk profile and concentration risk, and so on. So, the more interesting products we have on our market, the more they are able to invest,” Umar explains.

The proposals for PLCT also come at a time when local companies seem to be losing out to regional competitors.

Overall, the landscape seems challenging, with much of future successes hinged on the outcome of PLCT.

Documents sighted by The Edge show that the declines in key profitability and growth ratios and indicators had taken place even before the onset of the Covid-19 pandemic, meaning it would be inaccurate to blame lacklustre earnings on the virus entirely. It is also noteworthy that Malaysia’s weightage in the MSCI Emerging Markets Index declined to 1.3% at end-August 2021 from 2.4% in 2018, adversely affecting the capture of global funds.

While foreign funds have started snapping up Malaysian equities and there has been positive foreign monthly inflow of funds since August, sustaining their interest will require a strong recovery in earnings, and competition with other companies in regional markets is likely to be strong.

Based on MSCI Country Index, the Malaysian market’s Forecast Earnings Per Share 2Y-CAGR 2020-2022 is among the lowest in the region.

Considering the challenging outlook, PLCT will produce a book on each of the five tenets, with the first one on performance being released at the end the year.

“Then, we will begin to provide the guidance and support [needed] around them (PLCs) … Clearly, our FBM KLCI component companies will be involved [in PLCT] and they represent some 60% of the market at any given time, so they have a significant weightage.

“The key thing is that one would assume that PLCs want to be able to raise capital efficiently. They want a good share price with transparency, [which] will mean support, support of your share price means secondary issuance at a better price. Existing shareholders are happy, it all comes together,” Umar says in conclusion.