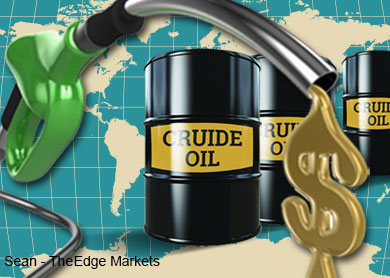 KUALA LUMPUR (Nov 7): A sustained drop in crude oil prices could have an adverse impact on the Malaysian economy, according to AllianceDBS chief economist Manokaran Mottain.

In an Economic Focus Nov 6, Manokaran said that as Malaysia was still a net exporter of oil, sustained low prices may likely pose adverse impacts on the overall economy.

“Falling crude oil prices is a double-edged sword to the government finances,” he said.

Manokaran said the net effect of a sustained fall in crude oil prices would likely be more disadvantageous to the revenue front rather than fuel subsidy savings, given that the oil and gas (O&G) sector revenue contribution to GDP ratio was 6.6% versus the fuel subsidy to GDP ratio of 2.6% in 2013.

“However, crude oil prices averaged at a low of US$88 per barrel in October, after hitting a 4-year low of US$83 per barrel on 15 October.

Manokaran estimated that every sustained US$10 per barrel drop in crude oil prices would shave off up to RM4 billion of budget revenue and savings of RM2 billion from fuel subsidy expenditure.

He said if prices were to average at US$90 per barrel for the next 12-month period, this would push the fiscal deficit to 3.2% in 2015 versus the targeted level of 3%.

“While inflation in the short term is likely to be muted as fuel prices are administered through government fuel subsidy provision, a sustained fall in crude oil prices poses downside risk to potential GDP growth in 2015.