Is the grass greener in Taiwan for chip designers? 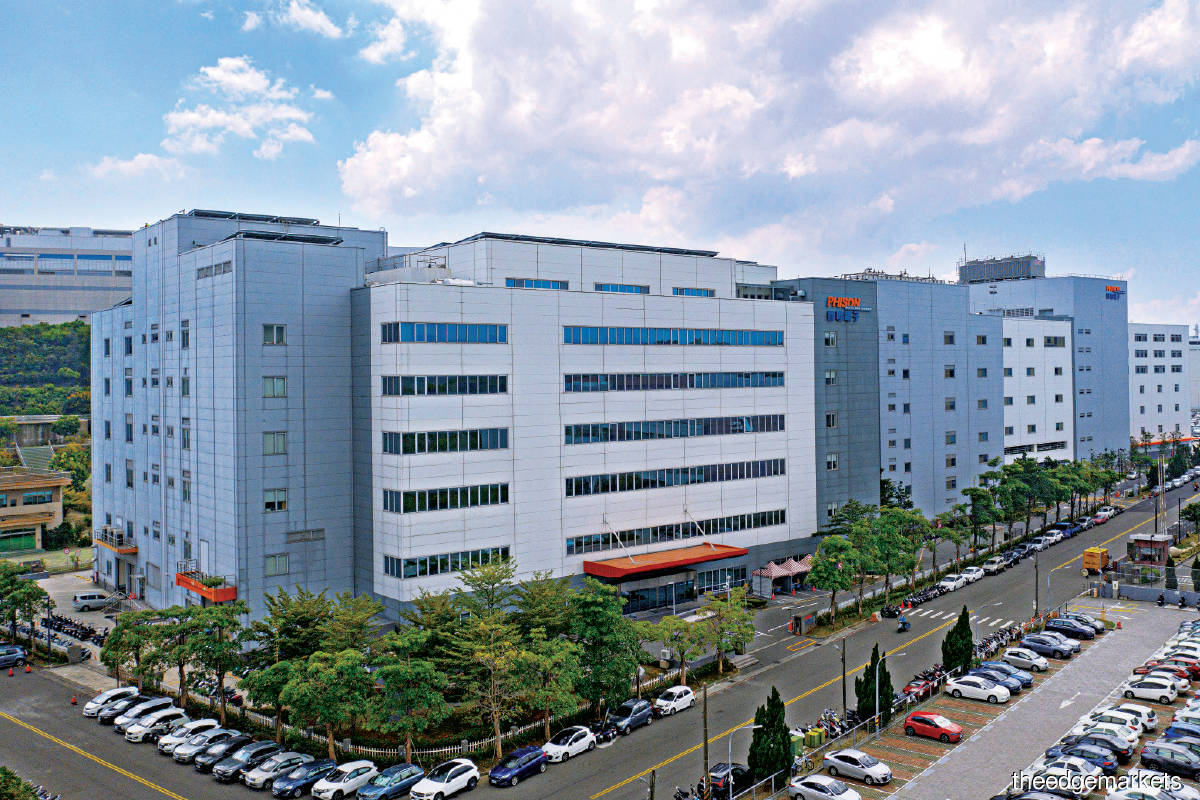 SEKINCHAN-born techpreneur Datuk Pua Khein Seng — famous for inventing the world’s first single-chip USB flash drive or pen drive about 20 years ago when he was only 27 years old — is often cited as an example of brain drain in Malaysia.

After completing his studies at Pin Hwa High School in Klang, Selangor, in 1992, the son of a farmer, with just NT$120,000 in his pocket, left at the age of 19 to pursue a degree in electrical control engineering at the National Chiao Tung University in Taiwan.

Today, Pua is the chairman of Phison Electronics Corp, a multi-billion Taiwanese technology company that he co-founded with four partners in 2000 and was listed on the Taipei Exchange four years later.

Interestingly, the Phison name is derived from the Chinese meaning “a group of people united”, which signifies its five co-founders. Over the years, the group has evolved from the consumer-driven pen drive business to become the application-driven integrated NAND-based storage solution provider.

In a rare exclusive interview, Pua tells The Edge that Malaysia’s electrical and electronics (E&E) industry does not have a mature ecosystem for integrated circuit (IC) design.

He encourages young Malaysians who are keen to pursue a career in chip design to join his company in Taiwan, which will provide them with a conducive environment for learning and nurturing their talent.

“It’s been 10 years since I did an interview with the Malaysian media. Today, I decided to do this interview because I have one objective — I want young Malaysians to know that if they can’t find the right job in IC designing, we welcome them to join Phison. We will hire and train them to be an IC designer,” says the 47-year-old, who has a 2.31% stake in the company.

Pua observes that the main strength of Malaysia’s E&E sector is assembly and testing and that the country is seen as one of the world’s manufacturing hubs among multinational corporations (MNCs). He points out that chip design, however, may not be a popular area in Malaysia and this may prove to be a setback for aspiring IC designers, prompting them to seek job opportunities in other countries.

Pua highlights that Phison — which has established very good relationships with universities in Taiwan — recently came up with a talent programme to attract young Malaysian engineers.

“Perhaps Malaysian university students can consider pursuing their Master’s degree in Taiwan and then join our company. I want young Malaysian talents to know that Phison’s door is always open to them.

“Taiwan has developed a very strong ecosystem in E&E engineering. As long as you wish to develop your skill set in the area of IC designing, we will welcome you with open arms,” he says.

Pua recalls that about 10 years ago, he tried to implement a similar programme in Penang but it failed to take off because the environment and the timing were not right.

“We invested in Penang but couldn’t quite find the right talent there. We even brought in some talent from Taiwan, but the ecosystem was just not good enough. So eventually, we sent them back. We realised that it was just too difficult [to do IC design in Malaysia].”

IC design, he stresses, requires teamwork and the IC design houses need to operate in a cluster. “If you come to Hsinchu Science Park in Taiwan, you can see thousands of E&E designing firms here. How many can you find in Penang? You may have many MNCs [operating] there, but [Penang] constitutes just a small part of their global operations,” he adds.

That’s one of the reasons why foreign E&E designing houses are not keen to come to Malaysia, he says. “Thus, if you are a young talent keen to pursue a career in IC designing, you need to seek opportunities elsewhere.”

“If you look at how foreign MNCs are attracting talent, especially the IC designers, the US firms would usually go for those from India while the Chinese firms would probably go for Singaporeans. As a Taiwanese firm, I think Phison should try to attract Malaysian talent. In terms of food and religion, Taiwan has a lot of similarities with Malaysia,” says Pua.

He is of the view that Malaysia should create a design hub that can generate wealth for all the players in the value chain, rather than just be part of the supply chain.

“I think we should all take a step back and look at the big picture. Yes, about 7% of total global semiconductor trade flows through Malaysia, but how much of this involves high-value activities? To be like the US’ Silicon Valley, Malaysia should emulate the likes of the US, Taiwan, China and Israel,” he says. Pua believes that as long as Malaysia continues to provide cheap land and electricity to investors, it will continue to attract MNCs to set up their operations there although “most of them will only see our country as a manufacturing hub, not a design hub”.

“To build a design hub, it is not just about land and utilities. If you look at the advanced countries in the technology sphere the likes of the US, Japan, South Korea, China, Israel and Taiwan, the key factor is the education system,” he says.

For a country to move up the value chain, says Pua, the goal cannot be achieved by simply hiring a few foreign engineers. Instead, the country needs to ensure that it has a strong education system that can consistently produce top-quality local talent in a big way.

“The government has to invest in talent, to build science parks, to attract investments, and all these things. And the result does not come overnight. You have to continuously do that and bear the fruits about 20 to 30 years later. In the past two decades, China has been emerging faster than any country. The country has put in a lot of effort in its education system and is now reaping the benefits. Education is really the key to everything,” he notes.

Today, Phison employs about 2,600 people in Taiwan, of which 1,800 are research and development (R&D) engineers. About 120 employees are Malaysians. Pua hopes that the group will be able to employ a total of 3,000 R&D engineers by the second half of next year.

“Our challenge today is that we are receiving a lot of enquiries, but we do not have sufficient team members to handle these potential projects. That’s exactly why we hope to attract young Malaysian talents to join our company,” he admits.

NAND will be the mainstream of semiconductor industry

It goes without saying that storage chips and devices are the foundation of technologies, be they communications, financial services, home entertainment, medical services, transport, industrial, research or cloud applications, which have integrated into our lives and advanced our world.

NAND is a type of non-volatile flash memory, meaning it does not require power to retain or store data. Devices such as digital cameras, USB flash drives, smartphones and SSDs utilise NAND flash memory for storage.

Pua anticipates that the NAND storage and NAND flash memory segment will be the mainstream of the semiconductor industry in the next two decades.

“The global smartphone sales to end-users are expected to remain at 1.5 billion units, but we are seeing more data centres and smart vehicles. I believe that in the next 20 years, NAND flash will be the highest growth segment in the semiconductor industry,” he predicts, adding that the world would need more NAND storage and NAND flash memory than ever.

“If you think about it, smartphone sales might remain stagnant in the next few years, but the storage and memory capacity will only get bigger. Therefore, the flash memory market will remain strong, and Phison will continue to experience business growth. Furthermore, the fifth generation (5G) will result in data explosion and, hence, more NAND flash memory. As long as the world continues to use smartphones, data centres and electric vehicles, Phison will always remain a relevant memory player,” he says.

Over the past 12 months, shares in Phison have gained 30% to settle at NT$385 last Wednesday, giving the company a market capitalisation of NT$75.873 billion (RM11.31 billion). The counter hit an all-time high of NT$620 at end-April. According to Reuters data, it is currently trading at a historical price-earnings ratio (PER) of 8.1 times, and a forward PER of 9.2 times.

A check on Phison’s website shows that Kioxia Corp is the company’s single largest shareholder with a 10.06% stake. Trusted Investment Account of Aberdeen Asset Management plc by HSBC Staff Provident Fund owns a 2.98% stake, while Fubon Life Insurance Co Ltd has a 2.75% stake.

This article was originally titled Phison Electronics aims to nurture Malaysian chip designers in Taiwan when it first appeared in The Edge Malaysia Nov 1 issue.