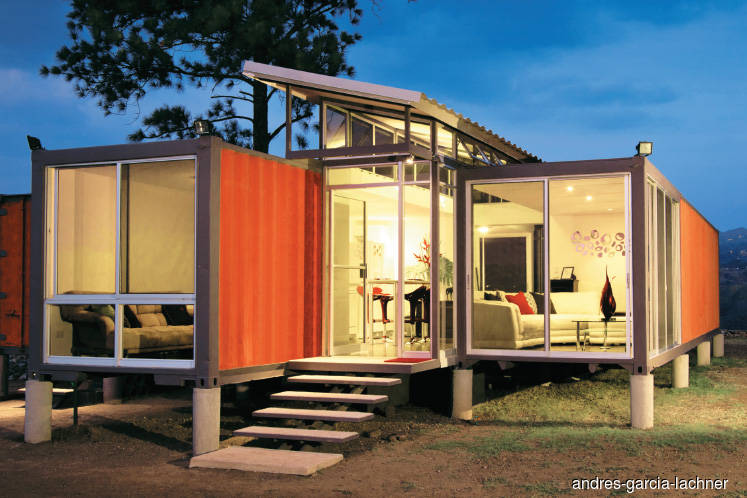 More and more people around the world are looking for more eco-friendly — and less costly — ways to build a home. For some, the solution is shipping containers as they are cheap, compact and eco-friendly.

Built to handle heavy loads, harsh climate conditions and handling by cranes, shipping containers are well suited to be transformed into buildings. And the time it takes to construct a container building is significantly less than for a normal property.

Here are some examples from around the world of shipping containers that have been transformed into buildings. 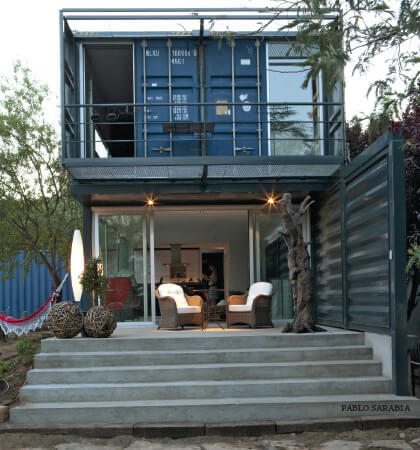 The 190 sq m El Tiemblo House is designed by Spanish architect company James & Mau. It represents the key values of the general contractor and manager Infiniski’s brand — modular, greener, cheaper, faster, better, cooler and more flexible. The 2-storey L-shaped house uses four recycled shipping containers. The L- shape creates a clear separation between  the common and guest areas. The main branch includes a living room, dining area and open kitchen on the lower level while the master bedroom — with an office, walk-in closet and bathroom — are on the upper level. The guest area comprises two bedrooms and one bathroom. Construction was completed in 2010 and cost €140,000. 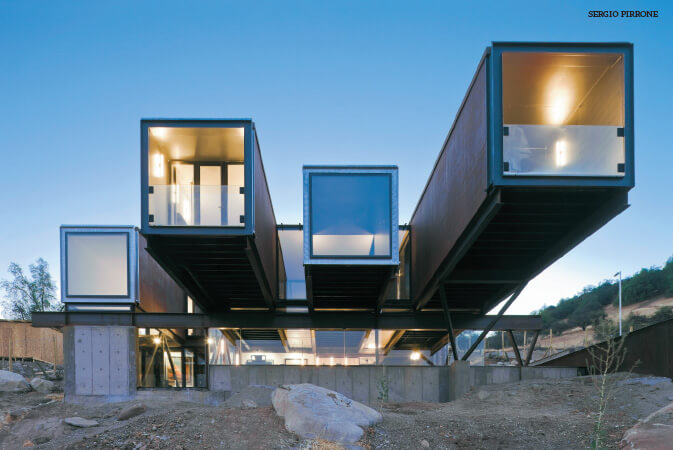 Chilean architect Sebastián Irarrázaval Delpiano designed this 350 sq m private home for an art collector and his family. To reduce construction time and cost, 12 second-hand shipping containers were used — five 40ft standard containers, six 20ft standard containers and one 40ft open-top container for the swimming pool. The land, on the outskirts of Santiago close to the Andes Mountains, is hilly, so the layout of the house follows the terrain. To improve air circulation, the shipping containers were arranged with spaces in between them to allow air and natural light to enter the building. Construction was completed in 2012. 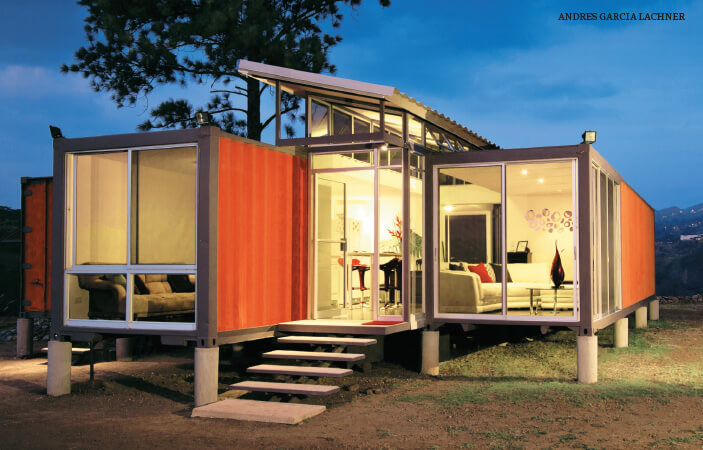 The owners of the 100 sq m container house had always dreamed of living a simpler life where they could be with their horses and enjoy the outdoors. Together with Costa Rican architect Benjamin Garcia Saxe, they explored the idea of creating an inexpensive house made of shipping containers, which would allow them to be debt free and live the life of their dreams. Containers of Hope was completed in 2011 and cost only US$40,000, which is less than the cost of social housing provided for the poor in Costa Rica. 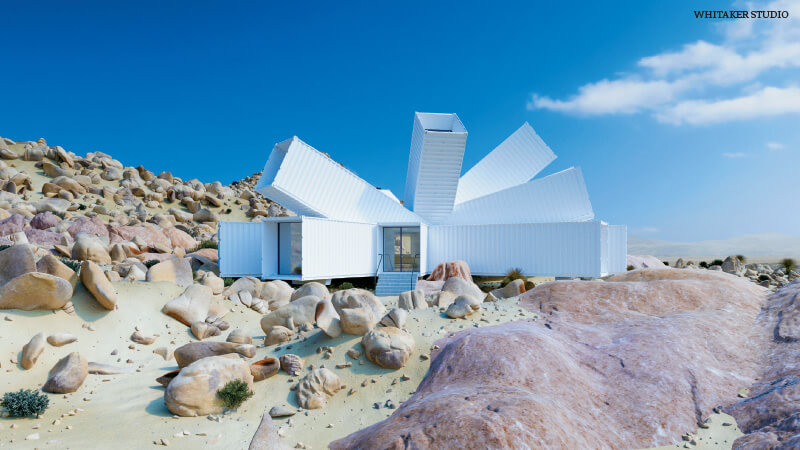 Joshua Tree Residence, California, the US

The original design of the Joshua Tree Residence was meant to be for an office building for a German-based advertising agency. Inspired by crystal growth in a laboratory, British architect James Whitaker had come up with the design several years ago but the structure was never built. Through a friend’s recommendation, a film producer who owns 90 acres near the Joshua Tree National Park in Southern California, visited Whitaker in the UK and commissioned him to construct this 200 sq m, single-level building. Construction will start next year and it will comprise 19 shipping containers. 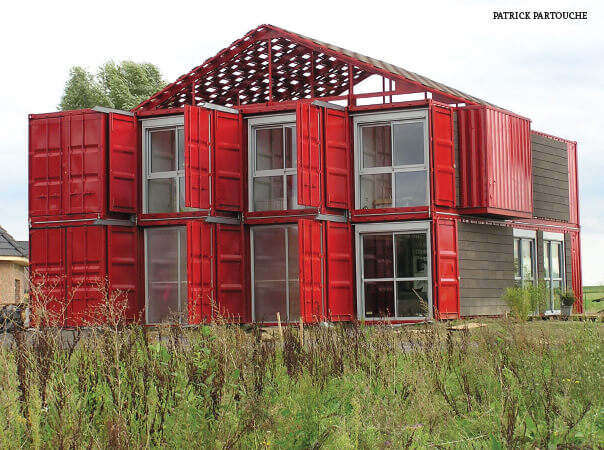 Made out of eight shipping containers, the 240 sq m Maison Container Lille was designed by French architect Patrick Partouche for a family of four. This 2-storey loft-style house in the countryside comprises a living room, kitchen, garage, toilet and laundry room on the ground floor and three bedrooms, two bathrooms, a toilet and an office as well as a fourth room to be completed by the owner on the first floor. A contemporary industrial style has been adopted for the interior while the exterior is in accordance with the regulations of the municipal council. Construction was completed in 2010 at a cost came of €221,000. 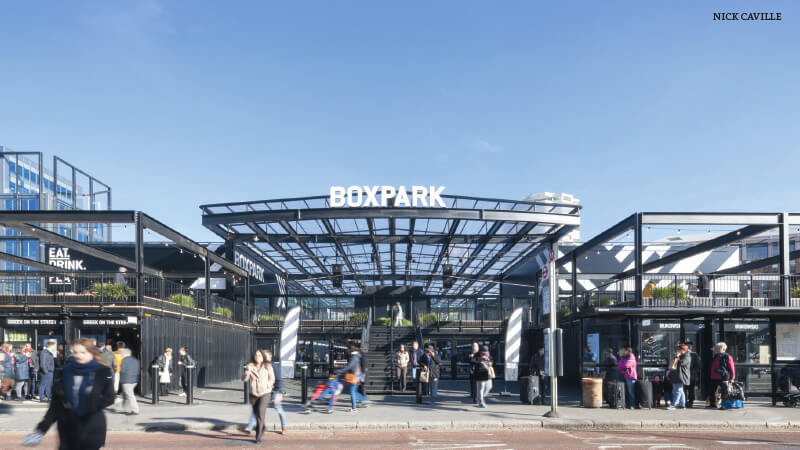 Boxpark, Shoreditch and Croydon, the UK

Said to be the world’s first pop-up mall, the first Boxpark is located in Shoreditch and was launched in 2010. Founder Roger Wade devised the concept of using shipping containers to deliver an independent and revolutionised retail experience that plants fashion and creativity back where it belongs — on the street. Boxpark Shoreditch houses a variety of restaurants and shops such as Marshall, Decorum, Diptyque, Cook Daily, Osteria Della Pasta and Dum Dums Donutterie. Unlike its big sister in Shoreditch, Boxpark Croydon, which was launched last year, focuses primarily on drinks and dining. The restaurants there include The Breakfast Club, Wings & Tings, Wine & Deli and MeatLiquor. 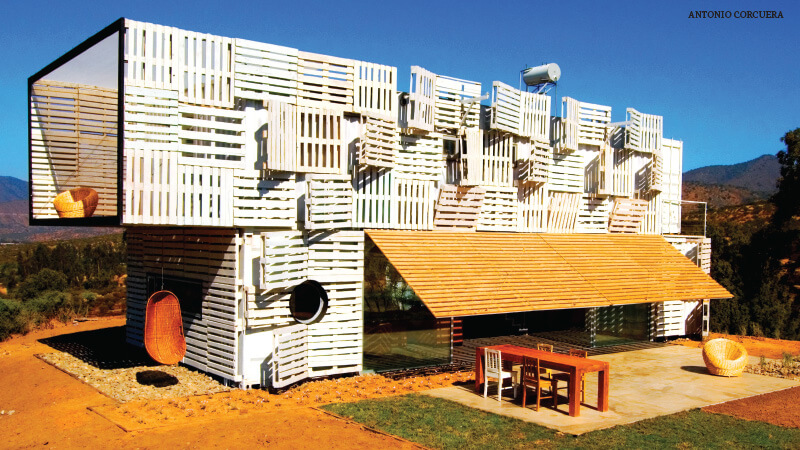 Also designed by Spanish architect company James & Mau and built by Infiniski, this 160 sq m house is divided into two levels and uses three shipping containers. As if it had a second skin, the house ‘dresses and undresses’ itself, thanks to ventilated external solar covers on the walls and roof, depending on its need for natural solar heating. The house uses two types of covers or ‘skin’ — wooden panels coming from sustainable forests on one side and recycled mobile pallets on the other. Construction was completed in 2009 at a cost of €79,000. 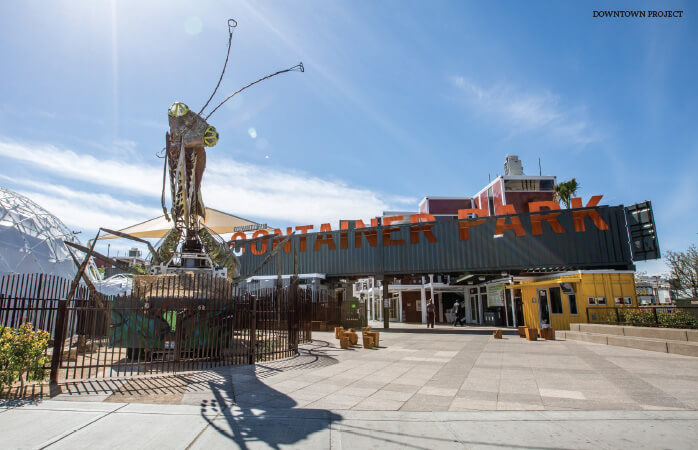 Sitting on a 1.1-acre parcel and opened in 2013, Downtown Container Park is an open-air shopping centre and entertainment venue made up of 43 shipping containers and 41 locally-manufactured Xtreme Cubes. It comprises 39 boutiques, eateries and bars such as Kappa Toys, Red Label Clothing Co and Pinches Tacos. It is part of internet entrepreneur and venture capitalist Tony Hsieh’s US$350 million investment plan to revitalise the downtown Las Vegas Fremont area, known as the Downtown Project. The project has three special features: The Mantis — a 12m tall, 1:150 scale replica of a female praying mantis built by aerospace engineer Kirk Jellum as a gift to his wife; The Treehouse — a three-storey interactive playground; and The Dome — a 360° immersive, ultra-HD experience showing rock n’ roll visualisations and educational adventures alongside aliens and dinosaurs.

The Cellar Door and Lookout were designed as a loose collection of timber-clad buildings that, through similar aesthetic and material treatment, form a modern interpretation of a traditional form of rural settlement that gathers over time. Through the placement of a series of timber-clad shipping containers, visitors can visually explore the landscape within and around the vineyard through curated framed views. The three distinct spaces reference different and unique views of the site — the sky, the horizon and the tower, which winds its way upwards and provides views to each of the compass points before culminating in an elevated and expansive view of the bay. 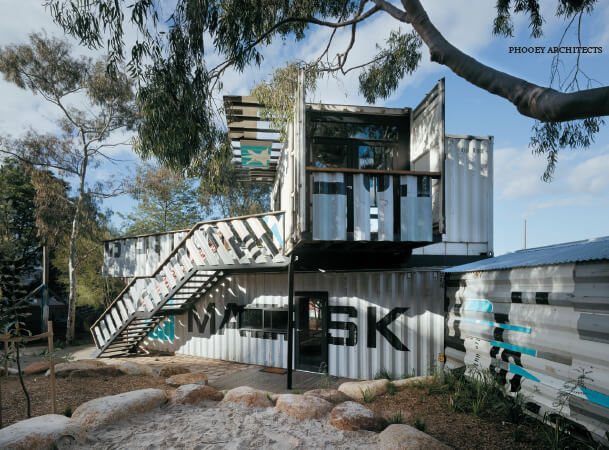 Completed in 2007, the Children’s Activity Centre by Australia-based PHOOEY Architects uses four shipping containers to form a place for a variety of functions — including study, painting, dancing and as a lounge. All materials bought to the site were durable, recycled, reclaimed, plantation, reused or salvaged from demolition. As a process of feedback design, the container off-cuts, with cannibalised super-scale graphics, were recycled into the final building and were refashioned into functional balustrades, sun shading and decoration. Timber deck off-cuts became soft linings. The skin of the building is padded with insulation and weather seals and openings are oriented to allow the cool, summer Port Phillip Bay breeze to flow through. 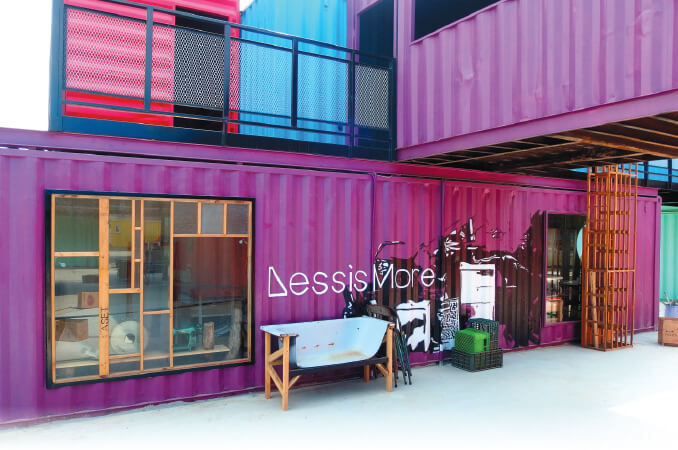 The Urban Development Bureau of the Kaohsiung City Government built this 7,000 sq ft mall, named KUBIC, made of 33 shipping containers. About TWD30 million contributed by the Urban Development Bureau and Blue Dragon Art Company was spent on construction. Opened in March this year, it houses restaurants — such as Kau Kee Desserts, Wowriginal Taste and Sojourn Food Lab — and other shops such as Art Factory, Little Freedom, O’doll Design and Xwood. KUBIC also provides a platform for local artists to hold art events and experimental performances. 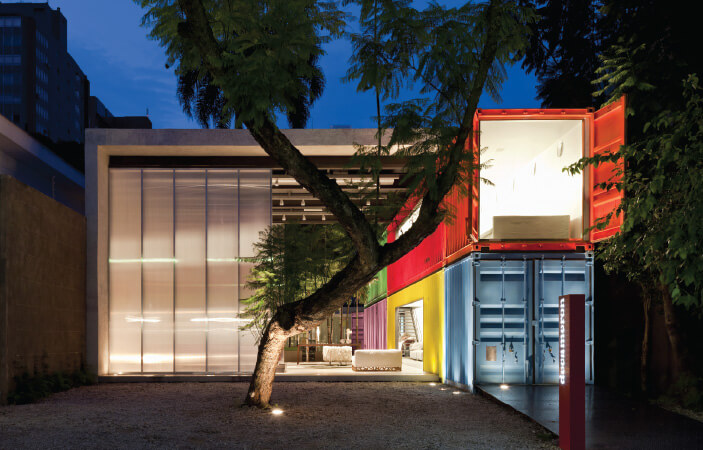 Located on a rented site at the furniture commercial alley in São Paulo, Decameron is a two-storey furniture store made from six shipping containers and designed by Brazilian architects Marcio Kogan and Mariana Simas from Studio mk27. The containers are vividly painted with bright colours and form tunnels where products are displayed side-by-side. The ample span of the ground floor, necessary to show pieces of furniture in relation to each other, is constructed with a metallic structure and it is closed by double-height alveolar polycarbonate metal casements. There is a patio filled with trees and a pebbled-ground at the back of the lot.