“We [want] to make the serviced apartments more attractive in this softer market,” she told The Edge Financial Daily in a recent interview. “We are also targeting investors who want to generate immediate rental income from their units, as we believe that the area is a good rental market, especially since the apartments will be linked to a mass rapid transit (MRT) station.”

Tropicana Gardens is an integrated development in Kota Damansara featuring serviced residences, a hotel and a mall on 17 acres (6.8ha) of leasehold land with a gross development value of almost RM3 billion.

There are three types of apartments studios, two-bedroom and three-bedroom units that range from 600 sq ft to 1,404 sq ft while the maintenance fees are 44 sen psf, including sinking fund.

Cyperus will be officially launched on Nov 8 at their sales gallery at Jalan PJU3/21 in Kota Damansara from 9.30am and include property talks by Ho Chin Soon and MRT Corp.

Over 50 units have been sold at a soft launch last weekend. The remaining units will be sold on a first come, first served basis, said Loh.

The fourth block of serviced residences is expected to be launched in the second half of 2015.

Meanwhile, the shopping mall will have a net lettable area of almost a million sq ft and will be positioned as a neighbourhood mall.

The hotel is likely to be operated as a four-star or five-star business hotel brand.

“We are [targeting] the business crowd because of the [upcoming]high-speed rail and the supporting public transport facilities that are expected to serve nearby areas,” said Loh.

As for its high-end residential project The Residences at W Hotel, Loh said Tropicana had delayed launching it as the group is still in talks with several operators of branded residences.

The project will sit on a 1.28-acre freehold parcel in Jalan Ampang.

“We are speaking to a few parties concurrently,” she said. 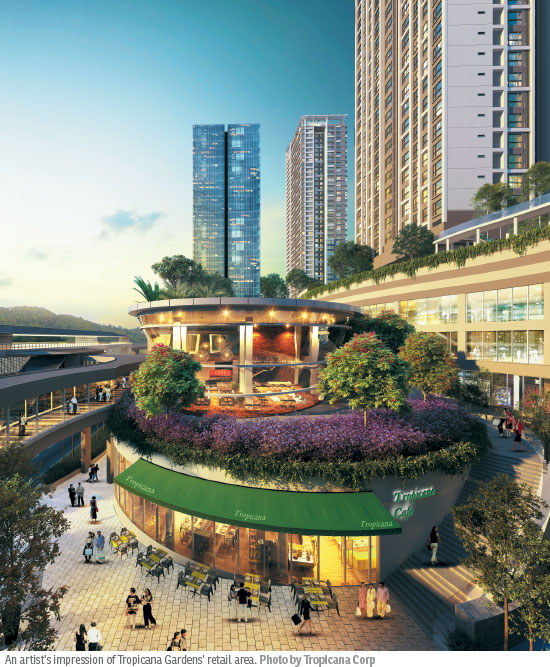