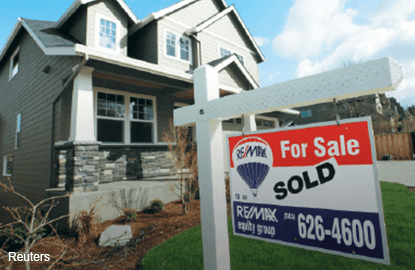 WASHINGTON (Feb 16): U.S. homebuilding fell in January as the construction of multi-family housing projects dropped, but upward revisions to the prior month's data and a jump in permits to a one-year high suggested the housing recovery remained on track.

Other data on Thursday showed only a modest increase in the number of Americans filing new applications for unemployment benefits last week, a sign that the labour market was continuing to tighten.

Housing starts fell 2.6% to a seasonally adjusted annual rate of 1.25 million units last month, the Commerce Department said. December's starts were revised up to a rate of 1.28 million units from the previously reported 1.23 million pace.

With overall permits now outpacing starts, homebuilding is likely to rebound in the coming months. Economists polled by Reuters had forecast groundbreaking activity slipping to a rate of 1.22 million units last month and building permits rising to a 1.23 million pace.

Prices of U.S. Treasuries slid and U.S. stock index futures trimmed losses after the data. The dollar pared losses against a basket of currencies.

The housing recovery is being driven by a strong labour market, which is boosting employment opportunities for young people and supporting household formation.

In a separate report, the Labor Department said initial claims for state unemployment benefits rose 5,000 to a seasonally adjusted 239,000 for the week ended Feb 11.

Claims have been below 300,000, a threshold associated with a strong job market, for 102 consecutive weeks. That is the longest stretch since 1970, when the labour market was much smaller. The labour market is at or close to full employment, with the unemployment rate at 4.8%.

Economists had forecast first-time applications for jobless benefits rising to 245,000 in the latest week. While the labour market is expected to continue to underpin the housing market, higher mortgage rates could slow demand for housing.

A survey on Wednesday showed homebuilders' confidence slipped in February, but remained at levels consistent with a growing housing market. Builders anticipated a slowdown in buyer traffic and continued to grapple with shortages of developed lots and skilled labour.

January's starts were above the fourth-quarter average, suggesting housing will again contribute to gross domestic product in the first three months of this year.

Homebuilding last month surged 55.4% in the Northeast region of the country. It jumped 20.0% in the South to the highest level since August 2007. Starts fell 41.3%in the West, likely due to the impact of unusually wet weather.

Last month, single-family homebuilding, which accounts for the largest share of the residential housing market, climbed 1.9% to a pace of 823,000 units.

Starts for the volatile multi-family housing segment tumbled 10.2% to a rate of 423,000 units.

Single-family permits slipped 2.7% last month, after increasing for five consecutive months. Single-family starts in the South rose to their highest level since August 2007.