US trade deficit jumps to five-year high on imports 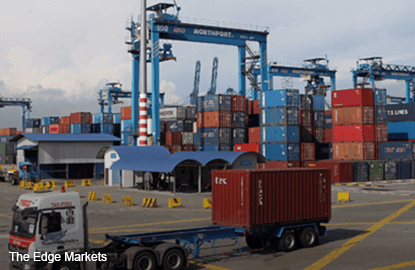 WASHINGTON (March 7): The US trade deficit jumped to a near five-year high in January as cell phones and rising oil prices helped to push up the import bill, suggesting trade would again weigh on economic growth in the first quarter.

The Commerce Department said on Tuesday the trade gap increased 9.6% to US$48.5 billion, the highest level since March 2012. The deficit was in line with economists forecasts. December's trade shortfall was unrevised at US$44.3 billion.

When adjusted for inflation, the trade deficit rose to US$65.3 billion from US$62.0 billion in December. Both the inflation-adjusted exports and imports were the highest on record in January.

The wider trade gap added to weak data such as housing starts, consumer and construction spending in suggesting the economy struggled to regain momentum early in the first quarter after growth slowed to a 1.9% annualized rate in the final three months of 2016.

The economy grew at a 3.5% pace in the third quarter.

Trade cut 1.7 percentage points from gross domestic product in the fourth quarter. The Atlanta Federal Reserve is forecasting GDP rising at a 1.8% rate in the first quarter.

The US dollar was trading marginally higher, while prices for US government bonds were little changed. US stock index futures were slightly lower.

The Trump administration is eyeing trade as it seeks 4% annual GDP growth. President Donald Trump has vowed sweeping changes to US trade policy, starting with pulling out of the 12-nation Trans-Pacific Partnership trade pact.

Trump also wants to renegotiate the North American Free Trade Agreement (NAFTA), which was signed in 1994 by the United States, Canada and Mexico. Economists, however, warn that the America-first or protectionist policies being pursued by the administration are a threat to the country's economic health.

In January, imports of goods and services increased 2.3% to US$240.6 billion, the highest level since December 2014. The import bill in part reflected higher oil prices.

The country imported 259 million barrels of crude oil in December, the largest amount since July 2013. The value of petroleum imports was the highest in two years.

The price of imported oil averaged US$43.94 per barrel in January, the highest since August 2015. Imports of cell phones and other household goods rose US$1.0 billion. There were also increases in imports of automobiles, which hit a record high.

Goods imported from China increased 5.1% to US$41.4 billion in January, while those from Japan tumbled 13.9% to US$10.5 billion. There was a 9.2% drop in merchandise sourced from Germany.

A strong US dollar remains a constraint to export growth. The US dollar gained 4.4% against the currencies of the United States' main trading partners last year.

The bulk of the increase in the trade-weighted value of the greenback occurred in the final months of 2016 and will probably take a while to reflect in the trade data.

Exports to Germany tumbled 10.7%. A Trump trade adviser has accused Germany of unfairly benefiting from a weak euro. Shipments of goods to China, also singled out by the Trump administration, dropped 13.4%.

The politically sensitive US-China trade deficit increased 12.8% to US$31.3 billion in January, while the trade gap with Germany fell 8.0% to US$4.9 billion. The United States also saw its trade deficit with Mexico shrink 10.1% to its lowest level since July 2015.