Bringing social change to the dinner table,  one rice bowl at a time 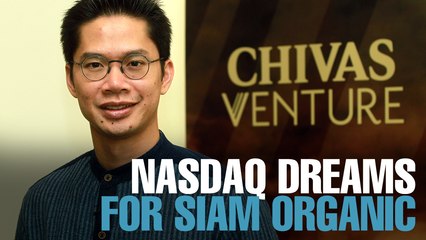 Social entrepreneurship, or social change for that matter, is not something that happens overnight. Even Peetachai “Neil” Dejkraisak took 15 years to set up Siam Organic Co Ltd, in 2011, which develops and markets the speciality organic Jasberry rice.

“I wouldn’t say I intended to venture into social entrepreneurship, but I’ve always wanted to make a difference. It took me about 15 years to really start this (Siam Organic) and prior to that, I was thinking about tackling the various problems faced by the world,” Neil tells The Edge.

But eventually, he realised that transformation had to begin at home — Thailand, that is.

When Neil and Siam Organic co-founder Pornthida “Palmmy” Wongphatharakul were Master of Business Administration students in 2011, they discovered that Thai farmers were among the most underprivileged in the world, earning just 40 US cents per day — a problem faced by a staggering 17 million people at the time.

And it occurred to Neil that by venturing into social entrepreneurship, it would go beyond generating profits for shareholders; it would also have a long-lasting social impact.

Man on a mission

Today, Siam Organic works with more than 1,800 farmers, supporting them in various ways such as providing Jasberry seeds, organic fertilisers, training and microfinancing and paying a premium price for their produce.

“I felt that to have a successful social enterprise, which is scalable and sustainable, the social and business missions must be aligned. But in most

cases, they are not. So, in Thailand’s case, there was the poverty problem faced by the farmers,” says Neil.

“So, I studied the problem and came up with a solution — developing a wonderful organic product that could be enjoyed and appreciated by the whole world while getting the farmers out of poverty.”

Neil cites icons such as social activist Martin Luther King Jr, Nobel Peace Prize laureate Muhammad Yunus and legendary Indian leader Mahatma Gandhi as his heroes as they taught him “it isn’t about being a good person but what we can do to make society better”.

His ideas for Siam Organic and, more importantly, for the world impressed and tugged at the heartstrings of the star-studded panel of judges of The Chivas Venture global social entrepreneurship competition, including Oscar-winning actress Halle Berry, in July in Los Angeles and won him the grand prize of US$400,000.

A key takeaway from the competition is, one must effectively communicate the brand.” — Neil

Since being crowned the winner, Neil says, Siam Organic has been working quickly to market Jasberry rice outside Thailand, recruiting more farmers into its network and implementing an IT system to simplify data collection, which will enable farmers to scale up their operations.

From the current 1,800 farmers under its wing, Siam Organic is looking to increase the number to 20,000 in three years. Neil says this target can only be achieved if all operations and systems are in place and running smoothly.

“As we are exporting the product, we are now investing in a proper IT system. This is because as you manage more farmers, you need critical, quick data. For now, everything is done manually. So we’re working on a system where everything will be integrated on the cloud platform along with analysis to help us make better decisions,” he explains.

He says the company plans to introduce Jasberry rice in Hong Kong, the UK, the US and Europe by year end and hopefully, in Malaysia and Singapore by early next year.

“We don’t really ask this question, but who would pay more for healthier products? My answer would be the Western market, because they are more educated and aware of the benefits of consuming organic products, which is not the case for us Asians,” says Neil.

Still, he foresees a sizeable market for organic food in Malaysia and has begun discussions with potential distributors and studying competitors’ products in supermarkets.

“Although not big, there seems to be a market here. I believe like elsewhere, Malaysians will be more appreciative of healthier food [despite the heftier price tags], given that it lowers the body’s total toxic burden,” he says.

Interestingly, Neil spent three years as an investment banker before he traded in his suits and ties for a straw hat and rubber boots, metaphorically. “I have a passion to make a difference. How has life been after winning The Chivas Venture? Well, I’m doing more interviews now,” he quips.

“But seriously, a key takeaway from the competition is, one must effectively communicate the brand. I’m proud to say Siam Organic has been progressively improving in this area.”

Neil says from the perspective of both a former competitor and social entrepreneur, without effective branding and communication, succeeding in a market where the number of entrepreneurs is growing by the day would only be wishful thinking.

“Running a start-up is hard enough and when you add the social element, it translates into higher costs, tougher decisions and heavier responsibility. But while it is more difficult, it is equally rewarding,” Neil says.

“So, for those competing in The Chivas Venture, look at it as more than just that — look forward to the experience and knowledge you will gain, because that will help you in the long run.”

Applications for the Chivas Venture 2018 are open from now until Oct 28. Visit www.chivas.com/en-my/the-venture/register